The Welsh Explored North America Long Before Columbus and the Vikings 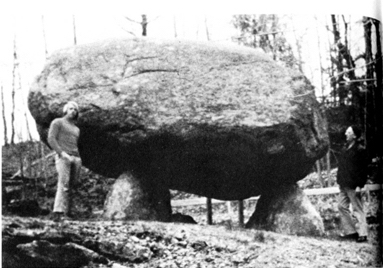 Preeminent Welsh historians, Alan Wilson and Baram Blackett, have amassed a large amount of evidence that supports the long-suppressed idea that the ancient Welsh people traveled to and explored the North American continent long before the Vikings and Columbus ever set foot on it:

Coelbren stones and other credible testimony and evidence have also been found in North America, giving strength to the hypothesis that the ancient Welsh were in America long before Columbus.

The popular belief is that Madog ab Owain Gwynedd sailed to North America in 1170 AD. Wilson and Blackett, using DNA profiling and radiocarbon dating on artifacts and human remains found in the US Midwest and Wales, claim that it was a Madog Morfran ap Meurig that first sailed to the continent, even earlier, circa 562-575 AD.

This was the period soon after or during a massive comet that allegedly destroyed much of Britain, starting the period known as the Dark Ages.

Wilson states that an Admiral Gwenon was then sent out to check on Madog’s discoveries before Brenin Arthur ap Meurig (King Arthur II) led the third major fleet migration in 574.

Although it isn’t an idea put forward by Wilson and Blackett, perhaps it isn’t inconceivable that, as with the two claimed Arthurs, there may well have been two Madogs who sailed to North America at different times as well.

King Arthur’s fleet to North America has been suggested to be in the hundreds in ships and in the tens of thousands in men.

According to Wilson, Welsh shipbuilders were the best in the business and many ancient Khumric kings fought wars of movement that relied upon their being able to move large numbers of troops and vast quantities of supplies from place to place – a fact he says is often overlooked by many establishment figures who are quite happy for other tribal groups, the Angles, the Saxons, the Vikings and others to have sailed long distances in ships of great speed and manoeuvrability.

Madog and King Arthur’s vast armies are believed to have travelled up the intricate river systems of North America, raising structures and encountering friendly and unfriendly tribes of native Americans before finally settling down mostly around the Midwest or the the Great Plains.

There are some claims that they possibly worked with and influenced South American civilisations as well – not so much of a stretch of the imagination if considering the possible influence of the Druids on Egyptian civilisation and Pyramid building.

People would do well to avoid negative knee jerk reactions and keep an open mind in this area – history teaches us that truth is most often far stranger than fiction.

Wilson and Blackett have spent much time in the USA with American historians, collecting considerable evidence and visiting sites of interest.

Evidence of Welsh speaking native Americans is numerous and far more common than what we have perhaps been led to believe, with books and historical records suggesting that this hypothesis cannot now be disregarded.

King Arthur II, claims Wilson, was killed in a battle with Native American tribes in what is today known as Kentucky and his body sent home to Britain.

In 1824, Thomas S Hinde, of the prominent Hinde family, wrote to John S. Williams, editor of The American Pioneer, regarding the Madog tradition. In the letter (pages 373-376) Hinde claimed to have gathered testimony from numerous sources that stated that in 1799, six soldiers had been dug up near Jeffersonville, Indiana, on the Ohio river with breastplates that contained Welsh coat-of-arms. He also gives several references to Welsh and Welsh-speaking Indians. The present-day location of the breast plates are unknown.

Reuben T. Durrett’s book ‘Traditions of the Earliest Visits of Foreigners to North America’ published in 1908 has an incredible amount of references to the Welsh Indians.

The establishment historians have done a very good job suppressing the true history of North America and at the same time promoting the fake history that we are all taught in school — that the “Native American Indians” first crossed the Bering Sea from Asia into Alaska, then migrated down into North and South America.  Then the White man showed up around 1500 and stole the land from the “natives” and killed the ones who resisted the theft.  It sounds like another marxist fairy tale of exploitation written by the usual suspects.

The Smithsonian Institution has been one of the main instruments of suppressing inconvenient archeological evidence that completely contradicts the official narrative.  As Whites moved West and settled the land, they uncovered all kinds of artifacts and inscriptions that proved that the White man was in North America perhaps thousands of years before Columbus, perhaps as early as the dawn of civilization in ancient White Sumeria in Mesopotamia.  Instead, Whites are taught the intentionally demoralizing fairy tale that they have common ancestors with Black Africans who once lived in trees.