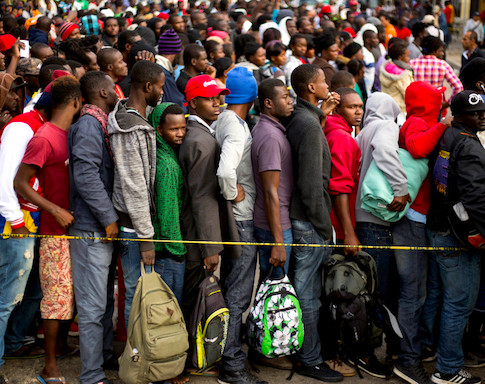 A large group of African migrants has gathered at the U.S.-Mexico border where they are demanding asylum hearings so they can enter the country:

One man told reporters that he and fellow Africans have been in Mexico for a month, and are frustrated that officials are not doing enough to facilitate their entry to the U.S., alleging that priority is being given to Cuban migrants.

“We are worried because at the shelters, the Cubans are paying and us Africans, we can’t,” the man said. “We don’t understand what’s happening.”

“There are so many people, not enough space. If you take your camera, you’ll see – it’s so bad,” he said of the migrant facilities in Mexico.

“Port of entry facilities were not designed to hold hundreds of people at a time who may be seeking asylum. And we are also charged with keeping the flow of legitimate trade and travel.”

One America News Network (OAN) cites National Border Patrol Council VP Art Del Cueto in confirming that there is indeed a surge of Cuban nationals at the southern border, along with a swell of Chinese and African migrants, although it is unclear how they are traveling to Mexico.

“About 4,500 Cubans are staying in Juarez, Mexico, as they wait for their asylum claims to be heard, but Cubans are just part of the story,” OAN reports.

“Agents in the Rio Grande Valley sector are coming in contact with increasing numbers of Chinese nationals and even migrants from a number of African nations as the word gets out about what some, including President Trump, would call America’s ‘weak immigration laws.’”

So these invaders (and yes, this is literally an invasion) aren’t just from Latin America but rather from every region of the world where apparently word has gotten out that the southern border of America is literally open for business, and that “business” is unrestricted Third World “immigration” at levels much higher than under the uber-liberal Obama administration.  How is it that after all of Trump’s tough talk on border security in the last three years, the border has become more symbolic than literal?

At this point we must assume that the Trump administration is intentionally flooding America with the Third World in order to create a “crisis” which will be solved by passing more draconian “reforms” that will take away even more freedoms from the American people in the name of “national security”.  And, of course, such a porous border will inevitably let in thousands of potential terrorists and other assorted violent criminal types who will use weapons in violent crimes which will be cited as another reason to restrict our Second Amendment rights.  It’s a nation-wrecking “win-win” for both political parties.