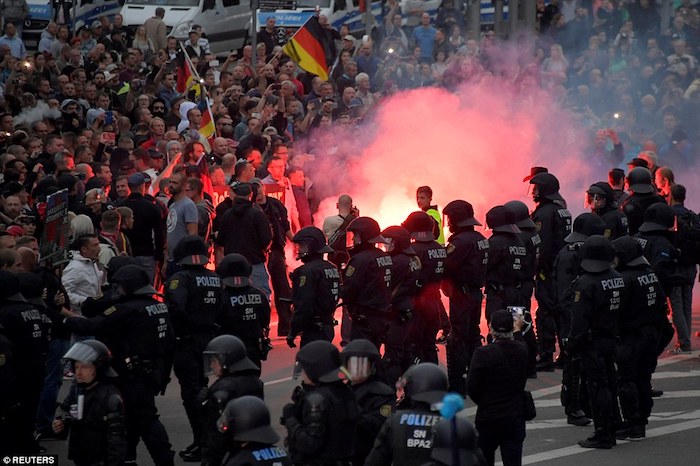 Anti-immigrant sentiments are rising in Germany as thousands of right-wing “extremists” took to the streets to protest the stabbing death of a “German” man who attempted to defend a woman against sexual harassment by a migrant:

Several people were injured Monday as thousands of far-right protesters took to the streets in the eastern German city of Chemnitz where a knife killing, allegedly committed by a Syrian and an Iraqi, sparked racist mob attacks that were deplored by Chancellor Angela Merkel.

The right-wing protesters chanted ‘We are the People’ and the Nazi-era term ‘Luegenpresse’ (lying press) while displaying placards that read ‘Stop the refugee flood’ and ‘Defend Europe’, the latter adorned with an image of an automatic rifle.

Some carried banners or insignia of the far-right AfD and neo-Nazi NPD parties and other extremist groups, while a handful delivered the illegal right-handed Hitler salute, police said.

Left-wing counter protesters yelled slogans like ‘Nazis out’ and ‘There’s no right to Nazi propaganda,’ at a larger group of right-wing demonstrators that retorted with ‘We are louder, we are more’ and ‘Lying press.’

The violence was sparked by the deadly stabbing of a 35-year-old German man during a street festival, after which a 22-year-old Iraqi and a 23-year-old Syrian have been arrested and held on suspicion of murder.

The stabbing happened around 3.15am, some two hours after the festival had closed, and stemmed from a verbal confrontation that escalated, according to prosecutors.

The victim, named as Daniel Hillig, a local carpenter of Cuban descent, was fatally injured and later died in hospital, while two other men, reportedly in their 30s, suffered serious stab wounds.

Mr Hillig, a married father, had showed support for clothing brand FCK NZS and anti-fascist movement Antifa on social media, and posted about gender equality protests in Turkey as well as legalisation of cannabis.

It is not known what sparked the argument, which allegedly took place by a cashpoint, but police have denied rumours that the fight broke out after the alleged sexual harassment of a woman.

It’s ironic that no such riots have taken place when an actual White ethnic German has been killed or raped, but when a “anti-Nazi” Cuban immigrant gets killed, all hell breaks loose, and the far right “extremists” just can’t take it anymore.

Perhaps, this will start a wave of such protests all over Germany — because the German politicians, who sold out the country to the interests of the jewish international bankers and their goy lackeys, are not going to solve this problem.

Anyone who wants to curb a Third World invasion in Germany will be painted as an “extremist”, and at this point, such a label should be a badge of honor.