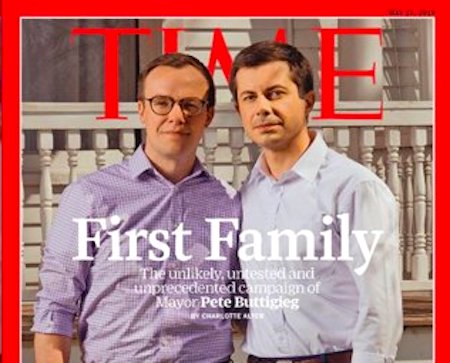 The mayor of South Bend and Democratic presidential candidate just landed on the cover of the May 13 issue of Time magazine alongside his husband, Chasten Glezman:

The couple is pictured, arms around each other, standing in front of their Indiana home. The main headline reads “First Family” and underneath it says: “The unlikely, untested and unprecedented campaign of Mayor Pete Buttigieg.” The issue hits newsstands on Friday.

Democrats have taken growing notice of Buttigieg since he entered the presidential conversation earlier this year, according to national tracking polls. Survey results released this week by Morning Consult and CNN suggest the South Bend mayor is one of the four most-preferred candidates among likely primary voters but far behind front-runner and former Vice President Joe Biden and U.S. Sen. Bernie Sanders.

The article discusses Buttigieg’s surge in popularity amid a crowded field since he announced his campaign in mid-April. The story’s author, Charlotte Alter, details the uphill battle for Buttigieg, which includes the enormous jump from mayor to president and how to reach minority voters.

Alter writes about Buttigieg’s ability to speak eight languages, noting that he is “particularly fluent in the dialect of the neglected industrial Midwest.” She writes that in a lot of ways, Buttigieg is “Trump’s polar opposite.”

“People already have a leader who screams and yells,” Buttigieg says in the story. “How do you think that’s working out for us?”

The story includes criticism of Buttigieg stemming from his firing of a black police chief as a result of an FBI investigation into wiretapping and notes how some South Bend residents said he has “blind spots on issues affecting black and Hispanic residents.” The article points out the city’s “racial wealth gap” and how some residents feel there have been failures in Buttigieg’s “1,000 houses in 1,000 days” initiative that aimed to repair or demolish abandoned homes.

Time Magazine, not surprisingly, is owned by yet another jewish billionaire and “philanthropist” Marc Benioff, who seems to have taken a personal interest in Buttigieg, when he used his vast power to overturn Indiana’s Religious Freedom and Restoration Act, which allowed people to legally decline service to sodomites because of personal religious beliefs.  Benioff lives in California, but used his wealth to overturn this law in Indiana, and Buttigieg was the main political beneficiary.