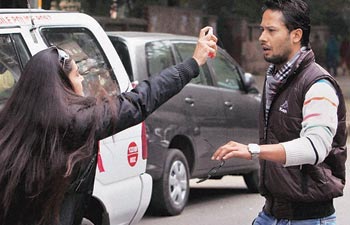 To help celebrate the New Year, Denmark has decided to legalize pepper spray to help Danish women protect themselves against the sharp rise in rapists roaming the streets in wake of the recent Muslim invasion of the once quiet country:

From January, private individuals in Denmark will be allowed to possess and use pepper spray if they are subjected to an assault.

In Sweden, however, it is still prohibited, which means that, particularly women feel more insecure than they would otherwise do.

The Ministry of Justice in Denmark states that the purpose of lifting the ban is to increase the security of the citizens.

The Danish society, like the Swedish, is plagued by a large number of assault crimes, including personal robberies and rapes, and the need for individual citizens to be able to defend themselves has increased.

In Sweden, however, pepper sprays will continue to be illegal. The ban affects women in particular, where the demand for defense spray has increased as assault rape has become increasingly common.

Swedish Women now have to settle for other kinds of sprays that are not as effective, or commit a crime by buying pepper sprays illegally on the Internet.

Of course we cannot expect the Danish authorities to admit that this new law has anything to do with the disastrous open immigration policies that have flooded the country with Muslim and African rape gangs. Nor can we expect them to admit that the police are so overwhelmed now with violent crime that they cannot effectively protect their White women against this Third World savages who now control large swaths of many of their once-White and relatively crime-free cities.

And no doubt one result of legalizing pepper spray will be that Danish hospital emergency rooms will be flooded with blinded Muslim and African men claiming that they accidentally pepper sprayed themselves.  But that’s the comedy of errors that you must come to expect and accept in a vibrant, multicultural paradise.