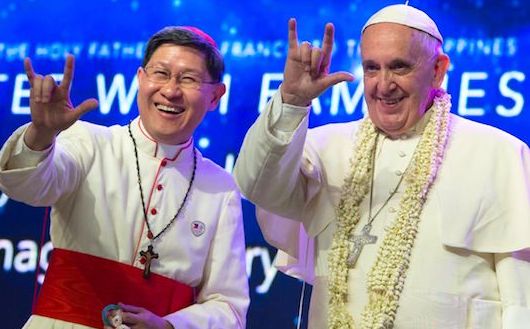 The nation supplying the most priests per Catholic citizen in the world is, surprisingly, Burma (Myanmar), according to a new study by Georgetown University’s Center for Applied Research in the Apostolate (CARA):

There are only 750,000 Catholics in the country – one per cent of the population. But the Church ordained 83 new priests last year, compared to only 19 new priests in Belgium.

CARA found that after Burma, the country with the next highest ratio of new priests to Catholics was Thailand, followed by Togo, Vietnam and Bangladesh. In other words, four out of the top five countries are Asian.

The results are surprising given that just three per cent of Asians are Catholic and only two of Asia’s 48 countries are majority Catholic: the Philippines and East Timor.

The overall picture may however change. “The future of the Church is in Asia,” revealed Cardinal Luis Antonio Tagle of Manila to Pope Francis. Already countries with sizeable Catholic minorities, such as India and South Korea, are sending more and more missionaries abroad.

The United States came in 50th place out of 108, in the report. One place higher, in 49th, was Great Britain. Both countries were far ahead of traditionally Catholic nations such as Spain (73rd), Germany (75th), Ireland (78th), Argentina (98th) and France (99th). At the bottom of the table was the once solidly Catholic Belgium.

CARA based the rankings on the most recent figures for priestly ordinations and Catholic population data for 2017 from the Vatican’s Annuarium Statisticum Ecclesiae.

The researchers only included countries that had at least 100,000 Catholics. If they had removed the 100,000 Catholics requirement, then Nepal would have come first. Other nations such as Samoa, Niger, Liechtenstein, Denmark, Kosovo, Kiribati and Fiji would also have featured prominently.

The new study reveals that the catholic church is flourishing beyond expectations in Asia.

No one in the Church seems to be asking the obvious question: ‘Why have White nations largely abandoned the Catholic religion?”  If they do ask this question, the answer is vague, such as claiming that White nations in general are turning away from Christianity, but this isn’t true, especially in America.

Conversely, what is so appealing about Catholicism to Asians and Africans, among whom the Church is finding the greatest number of converts?  Clearly, the empty rituals of the law which the Catholics practice must appeal to the superstitious nature of Third World non-Israelite converts.

Since Vatican II, the Church has become increasingly jewish in its tone and doctrines, but if you understand the real history of the Church, this transition should come as no surprise as it openly accepted converso Jews into its ranks of power.  According to some experts, at least 20 popes have been crypto Jews.

And the current pope, Francis, is doing everything he can to further liberalizing the Church, pandering to jewish demands for reform, such as rehabilitating the Pharisees, and ultimately allowing it to be subsumed into the planned “One World Religion,” a jewish brainchild based on the Talmudic Noahide Laws, under which Christians will be subject to the death penalty for idolatry.