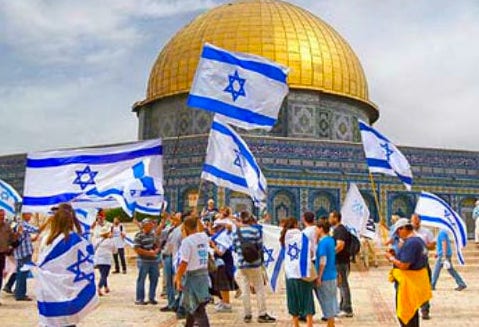 Rabbi Yosef Berger, who is in charge of King David’s Tomb on Mount Zion in Israel, revealed that President Donald Trump’s election began the process of  “paving the way” for the building of the Third Temple for the Jews, and the evangelical Christians who support Trump are going to build it for them:

“It sounds illogical that the Third Jewish Temple will be built by non-Jews,” Rabbi Berger told Breaking Israel News. “But Rabbinic sources state explicitly that this is what they must do to fix the historic wrongs that were committed…”

“Midrash Rabba asked, ‘why is edom compared to a ‘chazir’ [pig]? The answer Midrash Rabba gives is based on the root of the word chazir, which literally means ‘to return,’” Rabbi Berger continued. “Midrash Rabba stated, ‘in the future Edom will return the glory to its former status.’”

Rabbi Berger also quoted Rabbi Bahya ben Asher ibn Halawa, a 13th century Spanish Biblical commentator also known as “Rabbeinu Behaye.” The medieval scholar wrote that “the first and second Temples were built by the descendants of King David, but in the future, the Third Temple will be built by descendants of Edom.”

Rabbi Berger emphasized that these sources state explicitly that the Third Temple will be built by the descendants of Rome, i.e. Christianity…

…Rabbi Berger believes that President Trump’s election has already begun this process. The rabbi noted that Donald Trump’s name in Hebrew (דונלד טראמפ) in gematria (numerology based on Hebrew letters) equals 424 – which is the same numerical value of the phrase, “Moshiach (Messiah) from the House of David (משיח בן דוד).”

“But Donald Trump is not righteous enough or knowledgable in Bible to actually be the Messiah,” Rabbi Berger noted. “Trump’s connection to the Messiah is that he will play a role in one of the major functions of the Messiah. He will pave the way for building the Third Temple.”

“Trump will not personally merit building the Temple,” he continued. “Like Cyrus, he will pave the way for men who will begin the construction, and when the time is right, the Third Temple will descend from heaven.”

Rabbi Berger claims that Trump’s actions since his inauguration have already shown this prediction about the Christian role in the Third Temple to be true.

“No leader in history has recognized Jerusalem as the capital of the Jews and Israel,” he pointed out. “He has already created a great tikkun (reparation) for the Christians through his unprecedented relationship with Jerusalem. Trump is the representative of Edom that will perform that final historic reparation for his entire nation by building the Temple.”

King Herod, who built the Second Temple, was an Edomite not an Israelite, and the jewish Pharisees and Sadduces who used that temple, were mostly Edomites.  And today’s Jews are both the blood and spiritual descendants of those Edomites, who are now falsely claiming to be Israelites, a complete inversion of the truth.  The Romans who destroyed the Second Temple in 70AD were Israelites by blood, not Edomites, as the Apostle Paul attested to in his Epistle to the Romans.

That Donald Trump’s evangelical supporters have bought into this monstrous lie is in itself a fulfillment of the warning in the Book of Revelations that the whole world would be deceived by the Anti-Christ.  But it was also prophecized that the Edomites, who are descendants of Esau, would one day rule over the true Israelites, the descendants of Jacob.  That today’s Edomite Jews expect White Israelite Christians to build their Temple to Baal for them is proof that biblical prophecy is being fulfilled.  The prophet Obadiah stated that the Edomites would attempt to rebuild the desolate places, and that’s exactly what today’s Christian Zionists are unwittingly aiding and abetting.