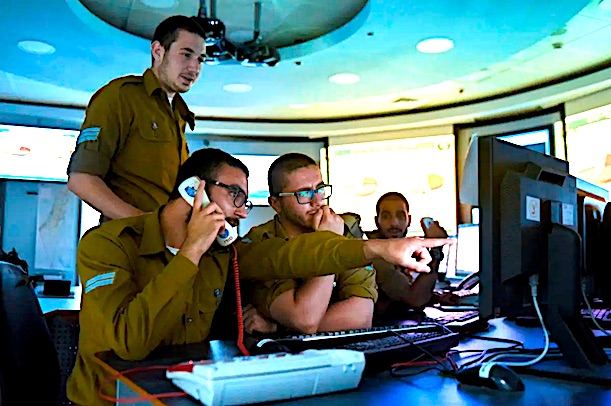 Just as the fake “plandemic” is winding down, Israel appears to be now setting the stage for what could be the next potential major international false flag event involving a massive ‘cyber attack’ that will change how we use the internet in the future:

The head of Israel’s National Cyber Directorate said Thursday that following a recent Iranian cyber-attack on the Jewish state’s water system, it was clear that “the cyber winter is coming and coming faster than even I suspected.”

Israel’s Channel 13 reported that Director-General Yigal Unna, speaking to a virtual conference held by the Israeli platform Cybertech, said, “We will remember this last month, May 2020, as a changing point in the history of modern cyber-warfare.”

Referring to the Iranian cyber-attack last month, which was contained by Israeli counter-measures, Unna said, “If it had been successful, and fortunately we managed to foil it and prevent it, but if the bad guys had succeeded in their plot, we would be now facing, in the middle of the corona crisis, very big damage to the civilian population,” including interruption in the water supply and chemical contamination.

He noted that the attack was also unique in that it was not criminal, but rather a military-style assault on essential civilian infrastructure.

Israel, he said, believed that this represented a paradigm shift for which it must prepare.

“We are now waiting for the next phase to come,” Unna said, “and it will come eventually. … I’m afraid that [the attack is] only the first major sign of a new era of attacks aiming at humanitarian targets.”

In addition, the Iranian attack indicated a major escalation in cyber-warfare, he stated.

“If we thought there are some rules of engagement or some lines that shouldn’t be or never be crossed, well all the lines are crossed and going to cross even harder in the coming future,” he said.

“The cyber winter is coming and coming faster than even I suspected,” Unna added, saying attacks will now become “more sophisticated and deadlier.”

Countries around the world, he implored, must now make preparations accordingly.

“The risk management at a national level should be in a new phase,” he said.

This new false flag operation, immediately on the heels of their COVID-19 false flag, is no coincidence — it demonstrates that they are intent upon accelerating these planned events so that the public is not allowed to catch their collective breaths and investigate any of them too deeply.

This new threatening phrase they are using — “cyber winter” — evokes ‘nuclear winter’, a bugaboo from the fake Cold War, and will soon be repeated in the media non-stop.

Check out this strange website, which is affiliated with the U.S. Department of Defense, called CyberWinterStudios.

Interestingly, the same 2010 Rockefeller Foundation report titled “Scenarios for the Future Of Technology and International Development” which predicted the recent “pandemic” almost to a “T” also predicted another disaster involving a major “Hack Attack” against major computer systems.

Judith Rodin, the President of the Rockefeller Foundation who wrote the preface to this uncannily prophetic report, just so happens to be Jewish, and she just so happens to sit on the board of directors of BlackRock, one of the world’s largest global investment management firms — clearly, a Rothschild front — and a major player in the recent pandemic bailout scam.

They always tell us ahead of time what the next false flag will be — and yet when it does come, the public will be taken completely off guard somehow.

This free internet is a huge obstacle to their plans for world domination — and a major false flag event that will bring the internet crashing down will be the excuse to put a total clampdown on our online activities.

Yet since so much of the economy is internet-dependent, a shutdown of the internet cannot last long before the world economy would grind to a halt.

To avoid this, the false flag must be short-lived — and, of course, Start-Up Nation™ — Israel — will be credited with “repairing the world” (tikkun olam) and getting us all back on our feet with only limited damage.

And after they “save the world” from this fake cyber attack and plandemic, we will all finally “learn to love our Jews,” as Donald Trump’s Antisemitism Czar, Elan Carr, demanded in a recent speech.