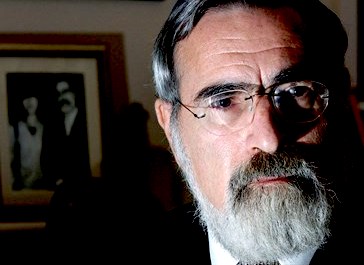 During a recent speech to the House of Lords, the UK’s former chief rabbi Jonathan Sacks seemed to imply that Jews worldwide should fear that another “Holocaust” could be in their future if “something” isn’t done about the alleged rise of antisemitism:

Sacks expressed his shock that when he visited Poland, he found that the Warsaw Ghetto was located in the center of town.

“Try to imagine 400,000 Hindus or Sikhs imprisoned within ghetto walls in the middle of London,” Sacks said. “Imagine people passing those walls every day, knowing that behind them, thousands were dying or being sent to their deaths, and no one said a word. How did it happen?”

“It happened because, in the 19th century – in the heart of emancipated Europe – antisemitism, once dismissed as a primitive prejudice of the Middle Ages, was reborn,” Sacks continued.

Sacks mentioned the different politicians during the Holocaust that allowed that same antisemitism of the Middle Ages to prevail once more. “That is where we are today,” he emphasized. “Within living memory of the Holocaust, antisemitism has returned exactly as it did in the 19th century, just when people had begun to feel that they had finally vanquished the hatreds of the past.”

“Today, there is hardly a country in the world, certainly not a single country in Europe, where Jews feel safe,” Sacks declared. “It is hard to emphasize how serious this is, not just for Jews but for our shared humanity.”

“You cannot build a future on the malign myths of the past,” Sacks concluded. “You cannot sustain freedom on the basis of hostility and hate.”

It would appear that it is Jewish leadership itself that is responsible for making Jews worldwide feel unsafe anywhere they dwell as they are continually reminded of the cartoonish specter of neo-Nazis behind every hedge lying in wait to harass and even “exterminate” all Jews the second they let their guards down.

And of course, Jews are constantly told that the alleged “hate” directed toward them is irrational and has nothing to do with anything Jews themselves are doing; rather, antisemitism arises out of thin air for no reason whatsoever, like a Grimm’s fairy tale to stoke childhood fears.

This kind of indoctrination is a form of psychological terrorism — this constant evoking of Hitler, Nazis, and “death camps”, and yet government “hate” investigators turn a blind eye to it, refusing to acknowledge the damage it does to Jews by exaggerating even the slightest unkind remark or act.

Common accidents on the streets are initially reported as potentially “vicious” Jew “hate” just to keep the state of fear ratcheted up among all Jews.

In certain cities, tiny populations of Jews are being given millions of dollars for private security forces allegedly to “protect” them from faceless antisemites — making Jews feel like they can’t leave their homes to walk the streets.

And all this fear-mongering seems to be leading in one direction: international draconian laws to make it illegal to make any Jew anywhere feel “unsafe” — but of course, the likes of Rabbi Sacks or the ADL will never be prosecuted for being among the chief purveyors of making Jews everywhere feel “unsafe”.