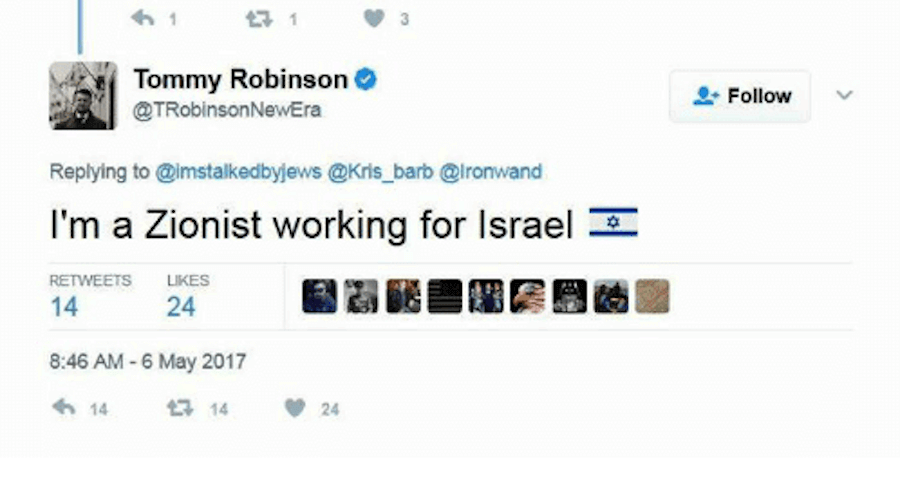 In a 2012 interview, Tommy Robinson denounced the British National Party — and other White identity groups — as being “backward” racist “Nazis” while at the same time he wore a button that stated “I Am A Proud Zionist”. He believes that Jews in Israel have a right to defend themselves against their non-jewish enemies, but the British people do not deserve the same right of self-defense — and if they demand the same rights as Israelis, Robinson labels him as “Nazis”.

Robinson claims he gained sympathy for Jews in England because they needed police escort to walk through Muslim neighborhoods, but Robinson never asked himself the obvious question: “Why do Jews get special police escorts in England, but White British people do not?”

Nick Griffin, the leader of the BNP, has openly questioned Robinson’s “traitorous” support of Israel over the British people, and claimed that Robinson, a Zionist “tool”, is leading his followers like “lambs to the slaughter.” Griffin has also pointed out the because of his support for Israel, Robinson has become the darling of the jewish-controlled press — and has received enormous support from the media because of his loyalty to Israel.

This would explain why the American media also sympathetically promotes the Robinson saga — both the mainstream and the so-called alternative news outlets such as Rebel Media, headed by jewish Zionist Ezra Levant, whom Robinson has given “exclusive” rights to his story.

Here we have Nick Griffin labeling Robinson as a tool of Zionist Jews: