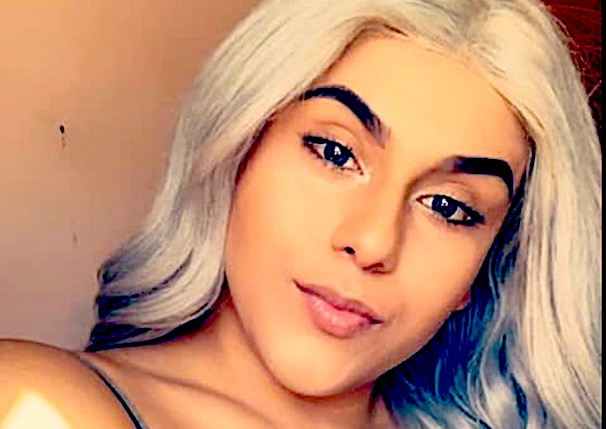 Jakob Nieves, a transgender man who seven months ago urged locals in Lawrenceville, Massachusetts to vote “Yes” on a veto referendum enabling those who identify as transgender to access locker rooms and similar facilities designated for the opposite sex, has now been slapped with sexual exploitation of a child and distribution of child pornography charges:

19-year-old Jakob Nieves, a man who identifies as a woman, “did knowingly employ, use, persuade, induce, entice and coerce” a four-year-old girl “to engage in any sexually explicit conduct” with him “for the purpose of producing any visual depiction of such conduct,” court records show.

Mr Nieves began exchanging messages with another person in a Kik group created for those interested in trading images of pedophilia. Kik is a mobile messaging app.

As the chat progressed, Mr Nieves allegedly shared with the conversation partner images of a small child performing indecent acts on his penis.

Unbeknownst to Mr Nieves, the conversation partner was an undercover federal agent. His transfer of photos portraying him engaged in illegal acts with a minor sparked a federal investigation, according to the criminal complaint.

On August 14, federal agents obtained a warrant to search the home of Mr Nieves, which is located on the 200 block of Lawrence Street. The search produced a phone, which agents say contains photos and videos of Mr Nieves sexually violating a minor girl in the bedroom of his home.

Christina DiLorio-Sterling, spokeswoman for U.S. Attorney Andrew Lelling, says Mr Nieves admitted to agents during the search that he had made and distributed the obscene material.

If convicted on both counts, Mr Nieves faces anywhere from 20 and 50 years behind bars, up to a lifetime of supervised release, and a $250,000 fine.

Mr Nieves is being held in federal custody [without bail].

Massachusetts Question 3, Gender Identity Anti-Discrimination Veto Referendum (2018), was approved in November 2018, with 1,806,742 or 67.82% of voters marking “yes” on the ballot to uphold the state’s gender identity policy. The Massachusetts policy prohibits discrimination on the basis of gender identity in places of public accommodation, including such sex-specific areas as restrooms and locker rooms. The penalty for each violation ranges from up to $100 and / or up to 30 days in prison to $2,500 and / or up to a year in prison. In addition, a civil penalty of between $10,000 and $50,000 may be imposed on each violation.

From the very beginning of the “gay rights” movement, the ultimate goal was to get unfettered access to our children, and now that they’ve achieved that goal, we are starting to reap the social benefits. And isn’t it ironic to see these schisms developing in the LGBT community between the “radical” pedophile transexuals and the “normal” gays who think that all of this has “gone too far” even for them?

What the so-called “normal” ones don’t realize is that they are not, nor have they ever been, “normal”.

Even the “normal” ones have an untreated mental and emotional disorder that has not only gone untreated, it has literally become illegal to give them the proper psychiatric care they need.  Instead, they’ve been patted on the head, told there is nothing wrong with them, even after they go on to commit suicide.

And now we are being told to treat pedophiles with understanding and respect because our “rejection” of them hurts their feelings and makes them feel “icky” about themselves.  The inmates are now literally running the asylum.