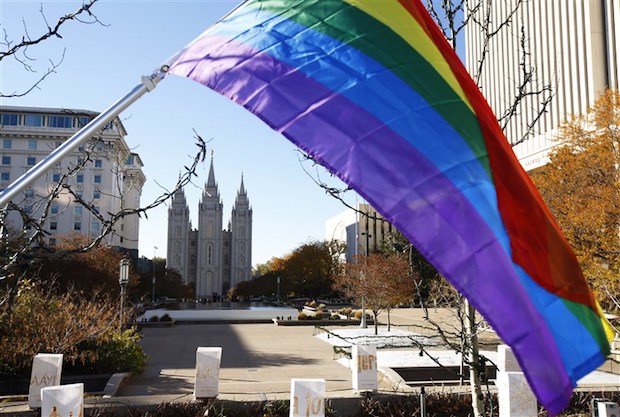 The Church of Jesus Christ of Latter-day Saints is repealing rules unveiled in 2015 that banned baptisms for children of gay parents and made gay marriage a sin worthy of expulsion:

The surprise announcement Thursday by the faith widely known as the Mormon church reverses rules that triggered widespread condemnations from LGBTQ members and their allies.

The church in a statement says it isn’t changing its doctrinal opposition to gay marriage and still considers same-sex relationships to be a “serious transgression.”

But people in same-sex relationships will no longer be considered “apostates” who must be kicked out of the religion.

The change also marks the biggest move yet by church President Russell M. Nelson, who has made a flurry of changes since taking over the faith in January 2018.

There are many Christians who do not believe that Mormonism is truly Christian, and might be tempted to use this approval of gay marriage and adoption as proof that Mormonism is corrupt, but then again, it’s really no different from the other major denominations today, who are doing everything they can to aid and abet the radical liberal agenda promoted by the Christian-hating media.

Well, it turns out that children raised by gay parents are more likely to turn out being gay themselves, so if the Mormons want to make sure that adult gays stay in the faith, they shouldn’t be so “judgmental” about these minor “lifestyle” choices.  Of course, if you baptize a child of two gay parents, you must implicitly condone the “fruits” of gay marriage, such as adopted children.  Regardless of what doctrine toward gays that the Mormons claim on paper, their actions now come firmly down on the side of the anti-Christs.