Trendy Toronto Restaurant Where All Employees Are Appetizingly HIV+ 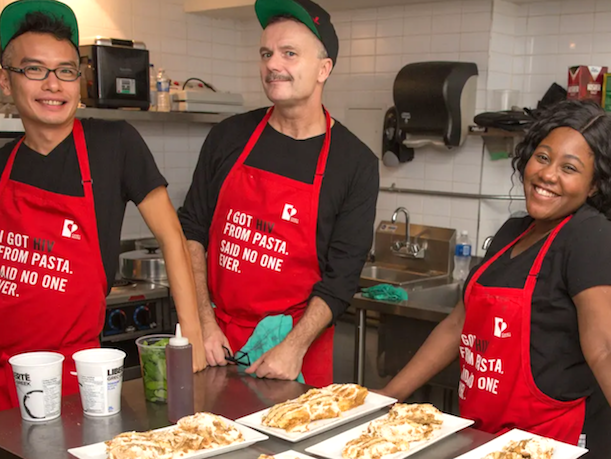 A Toronto pop-up restaurant is the first of its kind anywhere, and was born out of a recent poll suggesting many still fear sharing food with someone HIV positive:

The 14-person team was working to open June’s, a unique pop-up restaurant in Toronto that is the world’s first eatery in which all of the kitchen staff are HIV positive.

“We really wanted to be able to challenge the stigma that still exists around HIV,” said Joanne Simons of Casey House, Canada’s first and only standalone hospital for people living with HIV/Aids. The idea of a restaurant was born out of a recent poll that suggested only half of Canadians would knowingly share or eat food prepared by someone who is HIV positive.

The event comes as, on average, seven Canadians a day are diagnosed with HIV, a rate that has decreased only slightly since the 1980s.

When Casey House opened in 1988, its first client was brought to the facility flanked by paramedics in hazmat suits. Despite huge advances in treating the disease and better understanding of how it is contracted, much of the stigma of that era endures today, said Simons. “I think that there’s still this lingering notion that if I have regular human contact with somebody with HIV, I may contract it – and it is still a death sentence.”

She pointed to some of the reaction on social media after the pop-up was launched as an example. But with these comments came an invaluable opportunity to publicly address some of the myths that persist today around HIV.

“There were a lot of questions about what happens if somebody cuts themselves in the kitchen and they’re HIV positive,” said Simons. “We manage that like anybody would in a kitchen: you make sure you provide first aid, you clean up the area, you throw away whatever has been touched by the blood and you clean the surfaces. We would do that regardless of whether you have HIV or not – that’s just common sense.”

Others wondered about the risk of transmission. “There’s absolutely no risk that somebody can contract HIV from sharing a meal,” she said. “HIV doesn’t live well out of the body for any length of time and through the cooking the virus dies.”

Of course, the so-called HIV retro virus does not cause AIDS, never has and never will, and the CDC is aware of this, but the HIV industrial-complex has become so enormous and so lucrative that they don’t dare stop the train now.  What kills people who test positive for HIV is the anti-retroviral (ARV) drugs that they give patients to suppress the virus.  The side effects from these drugs are virtually indistinguishable from the symptoms of AIDS, which is why it’s easy for doctors to claim that people on these drugs eventually “succumbed to AIDS”.

But putting that reality aside, these restaurant employees obviously believe the disinformation about HIV, as do the potential customers who will eat there.  And there can be no other purpose for this restaurant than to normalize homosexuality, or better yet get rid of “homophobia”.  Don’t fear HIV+ people, don’t fear gays teaching your children, don’t fear transgender freaks in your public restrooms, etc.  The liberal media first pumps you full of fear and then shames you for being afraid.  Let your guard down, and embrace the rainbow future, goyim!