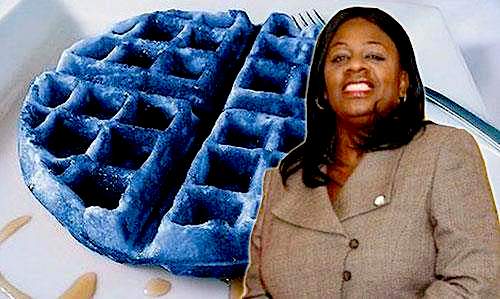 The mayor of Trenton, New Jersey, is calling on the city council’s president, Kathy McBride, who had gained national notoriety as the promoter of the ‘Blue Waffle‘ epidemic panic, to apologize after she used an alleged antisemitic slur that she mistakenly thought was a compliment:

The local paper The Trentonian reported that, at an executive meeting on Sept. 5, Council President Kathy McBride said a city attorney settled a personal injury lawsuit by being “able to wait her out and Jew her down.”

Mayor Reed Gusciora called on McBride to apologize, saying, “As the mayor of this city that encompasses diverse communities of racial, ethnic, and religious backgrounds, I find this to be offensive.”

“This antisemitic remark, particularly about an attorney in our law department that happens to be Jewish, should have no place in our public discourse,” he added.

Addressing McBride, the mayor said, “I hope that after some reflection you would apologize for these remarks.”

Councilwoman Robin Vaughn, however, defended McBride, saying, “We really need to get a more acute meaning and understanding of ‘antisemitic.’”

“I believe her comment ‘Jew down’ was more in reference to negotiating, not ‘I hate Jews,’” she added. “Inappropriate in today’s PC culture absolutely, but to Jew someone down is a verb and is not anti-anything or indicative of hating Jewish people.”

Yes, apparently even Blacks, who are perennial political tools of the Jews, need some clarification about what this ‘antisemitism’ thing actually is, but it’s not to the Jews’ advantage to define it beyond “anything the Jews don’t like.”

It would appear that only Jews are in a position to decide whether or not something is ‘antisemitic’, and we need to just trust them to be honest when they claim that their collective “feelings” have been hurt and that “another” pogrom is about to break out.

But then again, when a Jew’s feelings have been hurt, it’s a special event that needs to be handled by “experts” such as the ADL, SPLC, FBI, and the U.S. Department of Homeland Security.  When a Jew’s feelings are hurt, whether intentionally or inadvertently, those responsible need to be publicly shamed, rebuked, and preferably fired from their jobs to as to send a clear message to everyone that no one has the right to make a Jew feel like a “hairy monkey,” unless it’s another Jew, of course, then it’s perfectly fine.