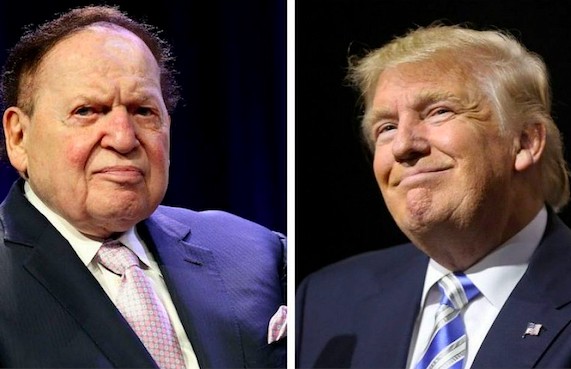 This past weekend during his address to the annual Republican Jewish Coalition in Las Vegas, President Trump revealed that he moved the U.S. embassy in Israel from Tel Aviv to Jerusalem as a personal favor to his largest donor, jewish billionaire Sheldon Adelson:

Saturday at [Sheldon Adelson’s casino resort] The Venetian was a different story.  Trump, it is said, has remade the Republican Party in his image, and this weekend, in a hero’s welcome, he showed how much he had brought along the party’s once skeptical Jewish contingent. Both he and Vice President Mike Pence attended the conference to speak.

There were still awkward moments during Trump’s speech that showed what divides many Republican Jews from Trump. But more evident was what has brought them together: Trump’s eager embrace of his advisers’ hawkish pro-Israel policies.

No one in the room was more aware of the 180-degree turn the relationship has taken than Trump himself. At one point a man cried out “Four more years!”

“That guy who just said that — he used to hate me, can you believe it?” Trump responded, drawing laughs.

Some organizers also spoke out about the change. Former Minnesota Sen. Norm Coleman, now the RJC chairman, introduced Trump by saying, “There were some doubters in this room, and I was foolishly among them.”

Coleman then led the room in a parody of the Passover song “Dayenu” (“It would have been enough for us”) by listing Trump’s tax cuts and his Israel-related actions, including moving the U.S. Embassy to Jerusalem, recognizing Israeli sovereignty over the Golan Heights, pulling out of the Iran nuclear deal and defunding the Palestinians.

Matt Brooks, the Republican group’s CEO, said Trump had earned the love in the room.

“There’s no question all the love that was felt in this room today and as Senator Coleman alluded to in his remarks, that was not the same situation, there were a lot of people who were not necessarily with the president during the primary process,” Brooks told the Jewish Telegraphic Agency. “But I will tell you now from an RJC perspective in the Jewish community, the amount of support that this president is getting in the Jewish community is growing exponentially.”

Addressing Sheldon and Miriam Adelson, the most generous donors to Trump’s 2016 campaign, who were present at the event, Trump said of his embassy move, “We got you something that you wanted, I can tell you, Sheldon and Miriam, that is the most important thing, I think, that ever happened in their life.”

In describing the moment he told David Friedman, the U.S. ambassador to Israel who has longstanding ties to settlements, that he would recognize Israel’s claim to the Golan Heights, Trump said, “He was like a wonderful, beautiful baby. He said, ‘Do you really — you would do that, sir?’ And I said ‘Yeah, I think I’m doing it right now! Let’s write something up.’”

Make no mistake, Donald Trump is President of the United States because Sheldon Adelson wanted him to be President, and he wanted him to be President because he knew that Trump would do what no Democrat would ever have the guts to do: risk expanding the war in the Middle East by not only moving the U.S. embassy in Israel to Jerusalem, but also by officially recognizing the Golan Heights as part of Eretz Israel.

Where is the outrage from the liberal, jewish-controlled media that Trump admitted he changed U.S. foreign policy in the Middle East as a personal favor to one of his campaign donors?  Given how the liberal Jews trash Trump for literally everything he says and does, why are they silent about this explosive revelation?  They are silent because even these liberal Jews know enough not to cross Sheldon Adelson whose contributions control both sides of the aisle in Congress.  And with Adelson now battling advanced cancer, you can be sure that Trump is going to move quickly to help Adelson check off his Zionist bucket list.