Trump Tells American Jews that Their Country is Israel, not America 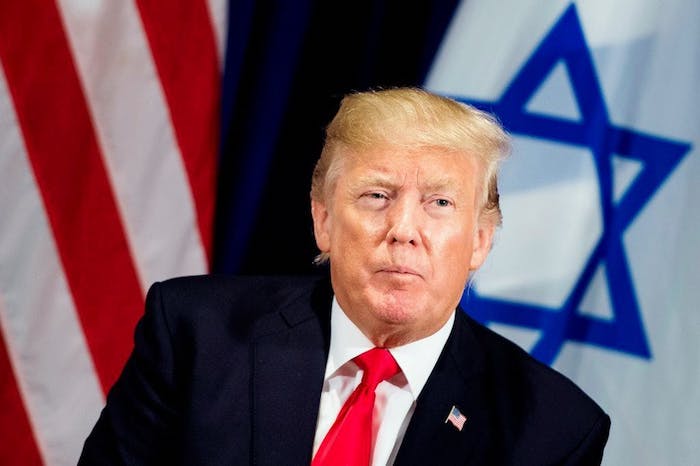 In an on-going effort by the jewish press to insinuate that the rabidly pro-Zionist Donald Trump is somehow “antisemitic”, they are now even criticizing him for suggesting that American Jews are more loyal to Israel than to America:

US President Donald Trump told American Jews that his vice president had great affection for “your country,” insinuating a dual loyalty to Israel.

Others not at the event were not so enthused about the insinuation, however unintentional, of dual loyalties.

“If Obama had said that, many of today’s attendees would have screamed bloody murder,” Eric Columbus, an Obama administration Justice Department official, said on Twitter.

The audience, which included Israeli envoy Ron Dermer and casino tycoon Sheldon Adelson, also erupted into cheers when Trump mentioned his decision last year to recognize Jerusalem as Israel’s capital and, earlier this year, to move the US Embassy to Jerusalem from Tel Aviv.

Trump unashamedly panders to the Jews at every turn.  We have never had a U.S. president who was so unapologetically pro-jewish, and yet the Jews are still not satisfied.  They dissect everything that comes out of his mouth and vet it for the smallest hints of “antisemitism” despite the fact that most of his grandchildren are jewish.  Many Jews actually seem to believe that Trump is secretly a Nazi who will throw them under the bus at any moment.

Among American citizens, Jews have the unique privilege of lawfully retaining citizenship to two countries — or more, and so they are understandably sensitive to grumblings from the goyim who claim that Jews have dual loyalty, and that for them, America does not come first.  Of course, Jews have been accused of having no loyalty to each and every country they have ever resided in, and they’ve been kicked out of them all at one time or another, except for the U.S., which, given their track record of subversion, is rather remarkable.