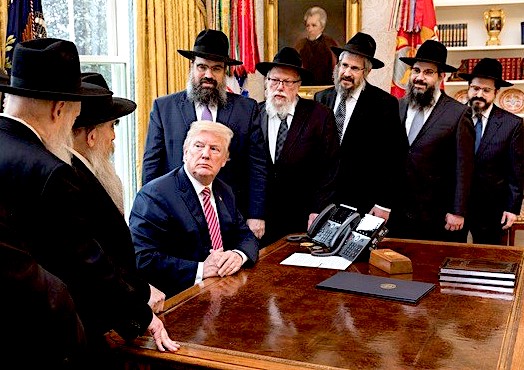 Jewish groups on Tuesday welcomed news of US President Donald Trump’s expected Executive Order which will allegedly protect Jews on college campuses from ‘antisemitism’ associated with the criticism of the policies of the Israeli government:

“President Trump is moving to combat Anti-Semitism in a situation where it is sorely needed. Jews are indeed a nationality, and Jewish students have faced increasingly-obvious bias on campus,” said Rabbi Pesach Lerner, President of the Coalition for Jewish Values.

“The fact that it has been thinly disguised as ‘anti-Israel’ activity is no excuse for bigotry, and adopting the definition of Anti-Semitism used by the State Department is the correct response. The President deserves our thanks for doing what is right and just,” he added.

“It will have an immediate impact on US campuses plagued with anti-Semitic and extreme anti-Israel acts, where many University officials complained that the lack of a working definition of anti-Semitism hampered efforts to deal with anti-Semitic incidents on campus. Now, through this Executive Order, necessitated by Congress’ failure to pass legislation, University officials and Jewish students will be better equipped to deal with hate attacks often associated with the anti-Israel BDS campaigns,” Rabbi Abraham Cooper, SWC Associate Dean and Director of Global Social Action, said in a statement released in Washington, DC.

“More broadly, President Trump’s Executive Order sends a strong message domestically and around the world against history’s oldest hate at a time of surging anti-Semitism on both sides of the Atlantic,” Cooper added.

Rabbi Cooper had testified at the House Judiciary Committee in support of a bill designed to provide University officials with a working definition on anti-Semitism. The bill sailed through the Senate but did not make it out of committee in the House. The SWC’s Director of Government Affairs, Mark Weitzman, was deeply involved in the drafting of the so-called IHRA definition on anti-Semitism that has since been adopted by many European States and which explains when anti-Israel criticism crosses over into anti-Semitism.

Officials said earlier on Tuesday that the order signed by Trump will effectively interpret Judaism as a nationality, not just a religion, to trigger a federal law penalizing colleges and universities deemed to be shirking their responsibility to foster an open climate for minority students.

Basically, jewish snowflakes on college campuses just can’t handle the fact that people actually object to the ersatz State of Israel’s ongoing ethnic cleansing of the Palestinians, so they want those people shut down, and even jail or execute them if need be.

Just ask the 60 million dead Russian Christians if you don’t believe that is exactly where this is headed.

Jews wouldn’t be enacting these draconian laws if they didn’t deeply fear that their hypocrisy and violent agenda were going to eventually be exposed.  They can’t win the argument on the preponderance of the facts, so their only recourse is totalitarian censorship.

For Jews ‘free speech’ always leads to ‘hate speech’ because if you allow people to say whatever they want, for some reason, they always want to criticize Jews and their abuse of power and wealth.  Funny how that always works out that way.