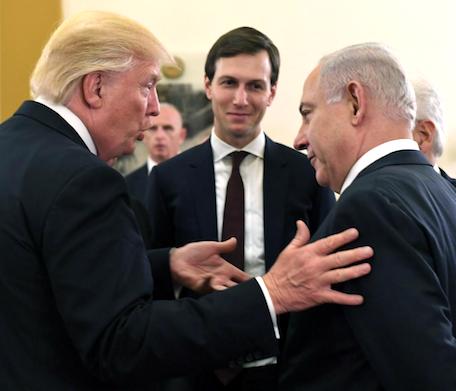 As President Trump tells his supporters that he’s going to close the borders to further illegal immigration, he’s given his son-in-law, Jared Kushner, the greenlight to come up with a plan that will allow record levels of low-skilled immigrants from the Third World:

Politico, citing four people involved in discussions, reported Wednesday that Kushner is developing a plan that would increase the number of low- and high-skilled workers allowed to enter the country each year.

Development of the proposal reportedly began in January, when Kushner began meeting with dozens of advocacy groups. Talks have since continued among a four-person group within the White House, led by Kushner, and a proposal could be submitted to Congress by this summer, according to Politico.

The news outlet also noted that President Trump personally tasked Kushner with coming up with a plan on legal immigration.

The plan would need to be approved by Stephen Miller, Politico noted, adding that the White House senior adviser is especially hawkish on immigration and has previously worked to reduce legal immigration.

Trump said during his State of the Union address earlier this year that he wanted legal immigration “in the largest numbers ever,” Politico added.

News of the policy push comes as Trump has continued to take a hard stance on immigration, threatening in recent days to close off the border entirely.

Trump, citing a crisis at the border, said last week that he would consider shuttering the border. He has continued to make that threat this week, telling reporters on Tuesday in the Oval Office that he would “100 percent” close the border if Congress doesn’t pass stricter immigration laws.

However, with Republicans warning that closing the border could have devastating impacts on the economy, Trump appeared to pull back from the threat on Tuesday evening. The president claimed during remarks at the National Republican Congressional Committee’s annual spring dinner that Mexico was now cooperating in apprehending migrants before they can reach the U.S. border.

America has tacitly agreed to discuss its “immigration problem” without mentioning race as a consideration whatsoever.  Anyone from any country, regardless of skills or even criminal history, is free to immigrate to America.  Prior to 1965, when the immigration laws were changed, America heavily favored only immigrants from White Christian countries populated by people of traditional European descent.  Since 1965, people from those countries have been systematically excluded in favor of any or all Third Worlders.

President Trump made it very clear this week that no matter what his immigration and border security plans are, he needs approval from his powerful jewish supporters before any new policy can be implemented.  And, of course, even “conservative” Jews who support “border security” also support continued “legal” Third World immigration, which is where Trump’s jewish son-in-law comes into the picture.  The plan will be to give the appearance of tighter border security, while at the same time, “legal” Somalis, Arabs, and Nigerians are flown directly into America’s heartland.