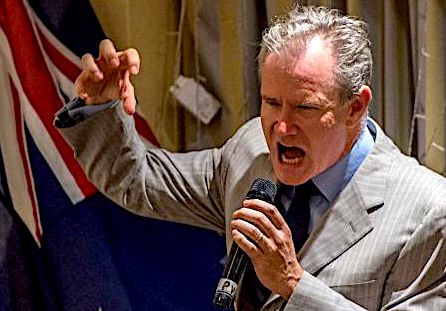 Before he was fired in 2018 for making ‘racist’ remarks about ‘“black-haired, slanty-eyed, yellow-skinned’ Chinese people, Sky News host, Ross Cameron, lectured Australians on how to humble themselves before Jews and bless them for all they’ve done for us:

“I just say, the conservative mind says do not invent something new if there’s already a beautiful solution available to you which someone else has invented. And basically the Jews have already invented everything, so don’t waste your time….just have the humility….As far as I know, I don’t have a drop of jewish blood in my body, but I would absolutely honored and delighted if I did.  And I just want to say to the Arab world, you’ve got 350 million Arabs in 22 countries. You pride yourself, the Arab sort of Bedouin culture prides itself on hospitality.  I just want to say to you that your policy of punting the Jews is in your interest.  And I think if you just sat down for a moment and said ‘Okay, we’ve got this little rare jewel of 6 and a half million Jews in the state of Israel of 8 million people, and this is one of the best things going for the Middle East.’  This is what I’ve described previously as the ‘magic in this operation’. So wherever you are in the world, if you have a jewish neighbor, say, ‘God bless you.’ When you see a Jew walking on the street, you should recognize an ancestor of King David, and say, ‘This is absolutely the most awesome story of human survival ever written.”

This moron, who doesn’t know the difference between an ‘ancestor’ and a ‘descendant’, is the very definition of what the Jews call a “useful idiot” who is willing to pander and grovel in front of them and encourage everyone else to do the same.  And he soon found out that “useful idiots” are completely expendable once their usefulness to the jewish elite has run its course.  This is what awaits anyone who thinks it’s possible to please the jewish elite if you are not one of them.  No matter how politically correct you think you are today, you will find yourself in a gulag in the future when it’s time to replace you.

Cameron is also a prime example of a Judas Goat, a White man who is willing to sell out his race to his jewish paymasters for 30 pieces of silver, and without Judas Goats, the Jews would have had very little chance of amassing so much power in our societies and over us.  Of course, it’s important to be able to recognize what the jewish agenda is and their hidden hand behind world events, but we also need to make those who betray us, like Ross Cameron, feel there will be consequences for dancing with the devil.  The Camerons of the world should be shunned by White society and held up for ridicule, not for making fun of Chinese people, but for something far worse: helping in the destruction of White countries.