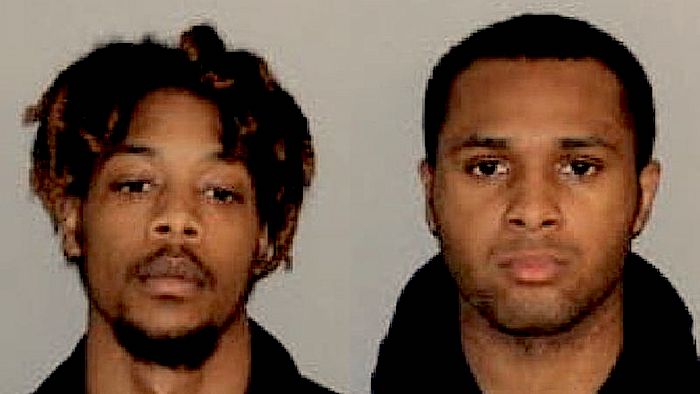 Two adult Black men in Tennessee, Isiah Dequan Hayes and Daireus Jumare Ice, have been charged with aggravated rape and exploitation of a 9 month old girl:

Two Tennessee men accused of raping a 9-month-old girl and filming the attack were indicted Tuesday on multiple charges.

Isiah Dequan Hayes, 19, and Daireus Jumare Ice, 22, are both charged with aggravated rape of a child and aggravated sexual exploitation of a minor, FOX13 Memphis reported.

The alleged attack was reported to police in October 2016 after the girl’s mother reported finding a cellphone video allegedly showing Hayes performing a sexual act on the baby.

She was able to identify Hayes through Facebook and turned the information over to police, authorities said.

Police identified Hayes and arrested him in February. Authorities said he admitted to committing the sexual assault.

Both men were being held in the Shelby County jail.

If the two perpetrators of this sick act were White, we’d never heard the end of it, but because they are Black, this story will disappear from the media with hardly any notice.

These kinds of attacks on children are becoming more and more routine in America and Europe as the non-White populations rapidly increase.

Muslims and Africans routinely rape underage girls across Europe, and the jewish-controlled media covers it up — to protect the egalitarian myth that we’re all the same, and that we can all live together in peace and harmony.

Blacks in America have no idea just how violent their fellow Africans are — in their African paradise.

And Blacks in America have no idea just how violent their fellow Blacks are in America — because CNN and even FOX won’t report these crimes.

This crime didn’t happen because these Black men are “under privileged,” as liberal enablers will claim  — this crime happened because Blacks, by and large, do not value Black lives like they claim they do.

Just look at the news headlines in Africa every day, and you’ll see stories like this one more often than not.

Rape is, in fact, part of African “culture”, and they themselves will freely admit it in moments of candor.

Children are often robbed of their childhoods in Black society, as a recent study in South Africa makes abundantly clear — but whether it’s in America or Africa, it makes no difference.

Just because a Black lives in America doesn’t mean they magically no longer behave like their African cousins.

And those who constantly make excuses for Blacks are the ones who truly hate them.