U.K. ‘Antisemitism Tsar’ Admits He Will Exaggerate The Problem To Justify Even Harsher Penalties 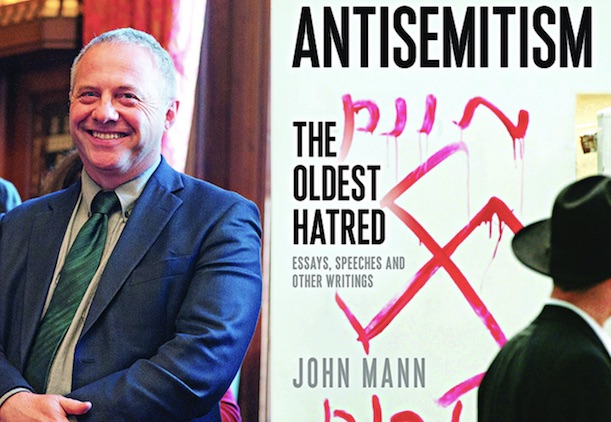 John Mann, the U.K.’s new ‘Antisemitism Tsar’ has vowed to make sure that those responsible for the spreading of hatred against the Jewish people in this country face the “most robust consequences“:

Speaking after his first public engagement in the new job at Finchley United Synagogue, Kinloss, last Shabbat, John Mann MP said he had accepted the role to prevent “good people, young people” from deciding they no longer belonged in the UK, or in Europe, because of rising anti-Jewish racism….

The outspoken opponent of antisemitism added: “I am independent of government – former Prime Minister Theresa May put me in her Resignation Honours – and frankly I will be doing this role whether people like it or not for the next five years.”

Setting out what he sees as the key focus of his new position, Mr Mann spoke of the “dichotomy” of “how not to overstate the problem so people become irrationally fearful of their everyday existence while at the same time not understating the problem.”

He said that we should be “thankful” the UK has not witnessed yet the “murder of people going about their everyday life simply because they were Jewish” as has been the case with atrocities in France, Belgium and the United States.

“Therefore my observation with regard to the balance of overstatement and understatement (in the UK) – the biggest danger is that we will understate the problem.”

Mr Mann warned that in his opinion the rise of antisemitism on British university campuses was a huge issue.

He said there was a vital role to be played by Jewish communal bodies and student leaders in dealing with this problem.

While physical attacks on British Jews were still rare, Mr Mann spoke of the growth of “pernicious, silent, isolating disdain” shown towards Jewish students “from hostile elements in their universities.”

In his new role, Mr Mann said he would work to ensure the IHRA definition of antisemitism “is used in its most effective way by our major institutions, football clubs, universities – this is achievable.”

…He also said there was a huge impact to be made through what he described as “use of the non-law, civil society and good organisation.”

He explained….”And there will be consequences for the antisemites – whether they like it or not.”

He said he would be acting on the advice of the Jewish community who would be required to “tell me what they think should happen….”

“This battle benefits everyone in this country….

“If we define our values – the things that make us British, then this is the number one battle.

“That we stand up against discrimination. That we do not allow the Jewish community to be attacked in the way it has been.

“And that when it is, we make sure that the perpetrators face the most robust consequences.”

Of course, if England has an increasing problem with antisemitism, it’s because the Jews in the U.K. helped flood the country with Muslims who historically dislike Jews, but John Mann knows better than to talk about that part of the antisemitism equation.  And why should Jews have special laws to have more severe punishment for those who criticize them more than any other people in England?

And he wants to allow Jews themselves to decide what the ‘appropriate’ punishment will be for ‘antisemites’.  Where does this Jewish Privilege come from, and how does it not eventually lead to an “Animal Farm” scenario where some pigs are “more equal” than others?

And John Mann freely admits here that he’s going to exaggerate the problem of “antisemitism” in England so that he can push through draconian laws that ideally, if the Jews have their way, would make “antisemitism” a capital offense, which is exactly what they did when they took control of Russia in the wake of the 1917 “Red” revolution.