U.K. Court To Decide If Vegans Should Have Anti-Discrimination Legal Protections 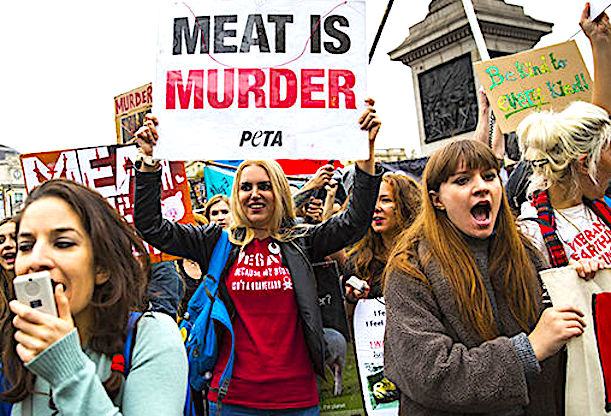 Veganism should be recognized a protected belief covered by anti-discrimination law, a British zoologist will argue at a landmark legal hearing on Thursday:

Jordi Casamitjana is suing his former employer, the League Against Cruel Sports, for wrongful dismissal after a dispute over pension investments.

He argues that his ethical veganism – a commitment to avoiding all harm to animals – is a way of life that should be treated in the same way as a religion or other deeply-held beliefs protected under the law.

That argument will be tested at a hearing that opened on Thursday in Britain, where increasing numbers of people are cutting down on meat and dairy products as awareness of the industry’s contribution to climate change grows.

“Ethical veganism is a philosophical belief held by a significant and growing portion of the population in the UK and around the world,” said Casamitjana’s lawyer Peter Daly.

“This case, if successful, will establish that the belief entitles ethical vegans to protection from discrimination.”

A spokeswoman for the League Against Cruel Sports said Casamitjana was dismissed for gross misconduct that did not relate to his ethical beliefs.

So will vegans be protected but not vegetarians?  Why not Marxists?  Why not any ideology that defines your unhinged world view?  This legal can of worms would create such a nightmare that everyone would demand the same unique ‘protections’ and render the legal system a farce, much more than it already is, if that’s possible.

This is the end game of identity politics: it will be illegal to ‘discriminate’ against each and every unique snowflake.

If this law were passed, every restaurant would be required by law to serve vegan food.  Non-motorized public transportation would have to be available in all cities, akin to Chinese rickshaws.  Veganism would be required coursework in all public schools.  It could bring a nation’s economy to its knees.

Imagine putting the weight of the law behind the insanity of global warming and veganism.  We would be sent back to the Stone Age within a generation.  And perhaps that’s exactly what’s afoot here.