U.K. Elects Yet Another Jewish Prime Minister With Boris Johnson 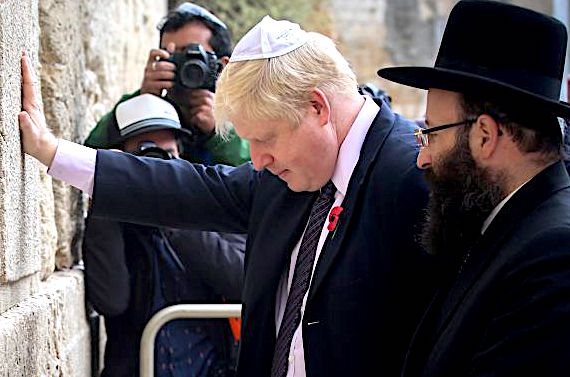 Jewish news sites are abuzz with the revelation that another one of their own, Boris Johnson, has been elected as the U.K.’s next prime minister to succeed Theresa May:

For British Jews, Johnson is a mixed bag because of his record on Israel, his own Jewish roots and his apparent disregard for how many Britons expect senior politicians to speak about religious minorities.

…Johnson’s maternal great-grandfather, Elias Avery Lowe, was a Moscow-born Jew born to a textile merchant. Johnson confirmed this in a 2007 interview for the Jewish Chronicle.

“I feel Jewish when I feel the Jewish people are threatened or under attack, that’s when it sort of comes out,” Johnson said. “When I suddenly get a whiff of anti-Semitism, it’s then that you feel angry and protective.”

…In 2014, Johnson called Israel’s attack on Hamas in Gaza “disproportionate,” and “ugly and tragic,” adding that “it will not do Israel any good in the long run.” He apparently tried to balance those remarks in the run-up to elections in the Conservative Party, which has seen a surge in support by Jews who have left Labour over its anti-Semitism problem, by calling himself a “passionate Zionist” who “loves the great country” of Israel. British politicians rarely call themselves “Zionists,” partly because of the actions of Zionist militants against British targets in pre-state Israel.

…However, Johnson was the U.K.’s first foreign secretary to pledge to vote against Item 7, a permanent U.N. Human Rights Council agenda item that singles out Israel for criticism, the pro-Israel group BICOM noted. He has criticized U.N. bias against Israel, calling it “disproportionate and damaging to the cause of peace.”

…On Tuesday, the organized Jewish community struck a more cordial tone, congratulating Johnson on the nomination and recalling its “long and positive relationship” with him “as both Mayor of London and Foreign Secretary.” The Board of Deputies of British Jews “look[s] forward to this continuing as he enters Downing Street,” said Marie van der Zyl, the board’s president.

Make no mistake, Boris Johnson is not British any more than Benjamin Disraeli was.  The press likes to mislead the British people into thinking that having jewish ancestors doesn’t necessarily make someone “jewish”, which is preposterous.

Virtually anyone who has any jewish ancestry knows it, and they know when to hide it when it’s convenient, and when to advertise it when it’s expedient.  The same can be said for David Cameron, another jewish prime minister in the U.K.

There were probably a number of others, but they don’t want to alarm the British people into realizing just how long a hostile elite has ruled over them.

But this is how the game is played in British power politics.  The Jews now have fellow Jews, Boris Johnson and Jeremy Corbyn, controlling both the conservatives and liberals, and everything in between.

The British are a conquered people and have become strangers in their own land.  Between the Jews that rule over them and the Muslims and Blacks who now comprise that majority of new births in the country, they are slated for marginalization, replacement, and extinction.

But they can’t say they weren’t warned by the likes of Enoch Powell and Oswald Mosley  that this is what the Jews had planned for them.