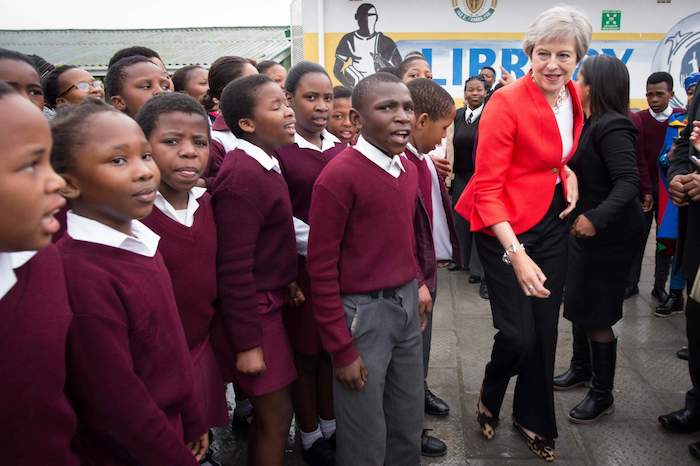 Right on the heels of South Africa’s announcement that they intend to legalize the theft of White-owned lands, the U.K. is giving the Blacks a huge bribe in the form of an “aid package” to assist in the “transformation” of the country:

At a Bilateral Meeting between President Rampahosa and British Prime Minister Theresa May yesterday she pledged £50-million over the next four years, and said the UK is ready to support South Africa’s transformation.

A Downing Street spokesperson said the British PM described the relationship between the UK and South Africa as “strong and deep, both bilaterally and as a key Commonwealth partner”.

The spokesperson said the two leaders discussed the potential for reinvigorating and revitalising the partnership between the UK and South Africa, and the Prime Minister noted that the UK stood ready to support South Africa’s transformation and national development plan. They agreed that tackling youth unemployment and social inequality was a key priority.

Ramaphosa and May agreed an ambition to build on the countries’ strong bilateral trade and investment relationship, including as the UK leaves the European Union. The Prime Minister noted that the UK is already the largest investor in South Africa, and that the UK are firm supporters of the President’s drive to attract even more investment to the country, said the Downing Street spokesperson.

They agreed £50 million new UK funding across the next four years to help South Africa improve its business environment to make it more attractive to investors including in the UK, and ultimately lift some of the poorest people in South Africa out of poverty by creating jobs and opportunities. The funding will be used to help identify and dismantle barriers to trade within Africa and beyond, which in turn will create a wealth of opportunities for UK business over the coming years.

Giving an African country this kind of money is like sending it down a rat hole–it will never be used for its “intended” purpose.

The real purpose of this pay-off was to allay any fears of investors in South Africa as the Blacks ramp up their rhetoric about stealing White lands. And this bribe will not work–none of the poorest Blacks will be “up lifted”–in fact, the only thing they will lift is White property.

Any investor who leaves their money in South African businesses at this point are foolish–nor should they feel confident that this bribe will make any difference in the ultimate destiny of the country. Ramaphosa will buy a new Rolls Royce or two, but Julius Malema and his radicals are going to want the rest of the pie–or else.