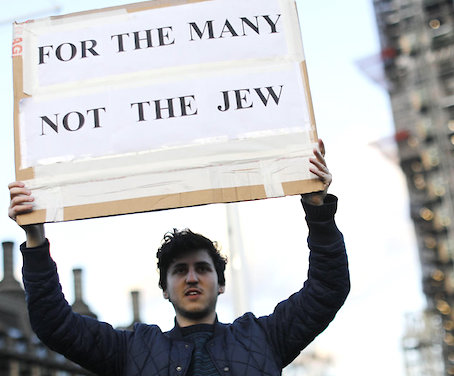 One of Britain’s leading Holocaust educators has suggested dropping the use of “antisemitism” because students do not understand what it means:

Dame Helen Hyde, a trustee of the National Holocaust Centre and Museum and a vice-president of the Jewish Leadership Council, instead advocated using the phrase “anti-Jewish racism”.

“Even when I talk to students at university, they don’t know what antisemitism is,” she said at a panel discussion on Holocaust education at the JW3 in London on Tuesday evening.

Pointing out that in most state schools there were no Jews, she said, “I was in three schools this week… When I used the word anti-Jewish racism, they understood.”

A JC poll last week found that fewer than half of adults in Britain, 47 per cent, understood what “antisemitism” referred to.

More than half of those aged 18 to 24 when asked to identify antisemitism, said they “don’t know”.

Dame Helen, the former head of Watford Grammar School for Girls, is also a trustee of the Holocaust Educational Trust, a fellow of the Imperial War Museum and sat on the Holocaust Commission which recommended a national memorial to the Shoah.

It isn’t just “students” and “young people” who don’t know what so-called “antisemitism” is; it would seem that even the British government cannot agree on what it is.  Apparently, it’s a secret password that only other Jews truly understand the meaning of, but in order to get control of the goyim, the Jews need to make sure everyone knows what “antisemitism” is, it’s equally important that non-Jews feel bad about it.

Perhaps people have trouble understanding the literal meaning of “antisemitism” because Jews are not a semitic (or shemitic) people.  So if you’re trying to come up with a self-apparent phrase to describe “irrational Jew hatred”, why would you use “antisemitism”?  Or how about replacing “antisemitism” with “criticizing any Jew, anytime, anywhere, for any reason” because that’s pretty much what it’s become to mean.  Or how about just make it illegal to use the word “Jew” unless you’re a Jew yourself?

On top of that, we are told that Jews are a religion, not a race, so how could “antisemitism” be a form of “racism”?  Clearly, needs to have a little chat with Dame Helen and remind her that Jews need to be both a  religion and a race, depending on who they are lying to.