U.K. Jewish Pedophile Who Made Over 1,000 ‘Indecent’ Pictures Of Children Will Serve No Time In Jail 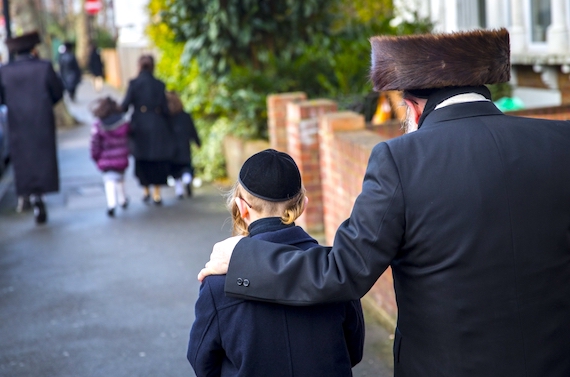 [He] was handed a six-month suspended jail sentence and was ordered to sign the sex offenders’ register for seven years on Wednesday.

He had pleaded guilty to three counts of making indecent photographs of children at Harrow Crown Court.

Rosenberg, 46, was known in his community as a security guard for his synagogue, where he would greet young children as they entered, the court heard.

Andrew Horsell, the defence counsel, did not specify at which synagogue Rosenberg served as a security guard.

He admitted his pornography addiction to police, and explaining he committed his actions because “curiosity can get the better of you”.

Judge Vanessa Francis told the defendant: “I am of the view that over a period of time you have been in some sort of psychiatric crisis which has led you to seek out images that have damaged your mental health, but more importantly, blighted the lives of children all over the world.

“I hope that there will come a time when you are able to face up to the harm that you have been causing to children.”

Officers were tipped off to Rosenberg’s crimes after suspicious activity was located on his internet service provider, raiding his home on May 29.

They found 1,148 abuse images, which he was accessing from 2010 until just a fortnight before his arrest.

Rosenberg then admitted he “could not stop” himself looking at abuse images.

Dipan Varsani, prosecuting, said: “Rosenberg said he never knowingly downloaded anything. He said that sometimes things pop up and sometimes curiosity can get the better of you. He said he did not download indecent material of children.

“During his interview at the police station he Rosenberg told the police he had a pornography addiction and he was already seeking help for this.

“He did say he was ashamed of his actions and that he was not interested in child pornography.

“He said he was aware of saving the images but that there must have been a blanket saving and that that is how the material appeared there across a number of his devices.

“It has taken him to places he is not proud of. He went on to explain how he was ashamed and how he wanted to turn his life around.”

Mr Horsell told the court that Rosenberg was a member of the “tight-knit” North London Jewish community, where the knowledge of his paedophilia had seen him “fall from grace”.

Mr Horsell said: “He plays a role in that community – he stands guard outside of the synagogue. This is a man who has worked all his life.

“He has taken significant steps off his own back. He knew what he needed to do and he did it. He is a man of intelligence, that much is obvious.”

Rosenberg was also ordered to serve seven years of a sexual prevention order, complete 50 hours of community work, 20 days of rehabilitation and pay £115 in court costs.

He got caught with over 1,100 “indecent” photos of “abused” children, but the court believed him when he said he “was not interested in child pornography,” but apparently only when it’s made by someone other than himself.

This article is intentionally vague on details for fear of public outrage, but it appears that the children he was hired to guard were counted among his victims, but this should shock no one considering child rape is rampant among Orthodox Jews, according to one prominent rabbi.

Another elderly Jew in the New York City area admitted to molesting “hundred” of school children over a period of 50 years, and yet he has served virtually no jail time either.  There seems to be a pattern here.

So while Jews in the U.K. are ‘delighted’ that British singer, Alison Chabloz, is actually going to jail just for singing songs that poked fun of Jews, this pedophile monster, like many others before him, will not spend any time behind bars, even though the judge believed Rosenberg had “blighted the lives of children all over the world.”  He’s been punished “enough”.

But remember, jewish behavior, we are warned, is not the cause of antisemitism.