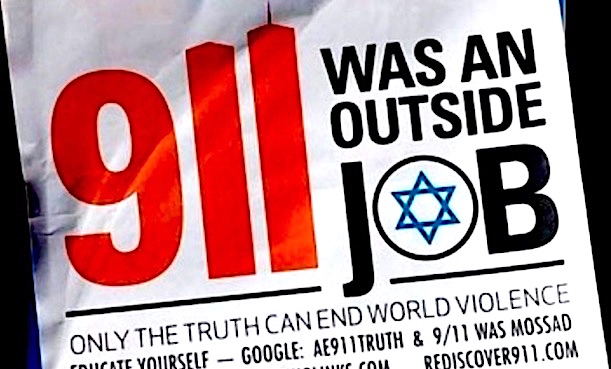 A U.K. secondary school textbook that asks students “how it could be argued that the creation of Israel was a long-term cause of the 9/11 attacks” has been removed from sale by its publishers after prompting widespread outrage among Jewish apologists for Zionism:

The Board of Deputies [of British Jews] said the question, which featured in Understanding History: Key Stage 3: Britain in the wider world, Roman times – Present, was “dangerous” and “feeds into a prevalent antisemitic conspiracy theory”.

Board vice President Edwin Shuker said: “It invites the students to find a link between the creation of Israel and the 9/11 terrorist attacks – which feeds into a prevalent antisemitic conspiracy theory.

“This is an outrageous warped version of history. How this was allowed into a textbook to be used in our schools is a cause of great concern. It should immediately be withdrawn and investigated.”

The book, published in 2019 by Hodder Education, is aimed at 11 to 13-year-olds. The question on Israel and 9/11 comes following a section on Israel and Palestine under the heading “Muslim mistrust of the West, 1900-66“.

Hodder Education Group on Thursday said the textbook had been removed from sale, adding it would publish a revised issue following a review.

It said: “We appreciate the phrasing of the question is not as precise as it might have been and we are very sorry for any offence this has caused.”

What is misleading about this whole controversy is that the textbook posits the discredited ‘conspiracy theory’ that Muslims pulled off the 9-11 attacks to punish the United States for its support of Israel.

This is the same type of drivel that liberal stooge Michael Moore promoted in his 2004 Hollywood-acclaimed documentary “Fahrenheit 9/11” which blamed the attacks on George Bush and his relationship with the Saudis.

Israel, international Jewry, and its Zionist sayanim in America were indeed behind the attacks — and Muslims were the convenient patsies who took the fall for it.

The U.K. government has been especially active — at the behest of British Jewry — to silence any real investigations into the Jewish hand in the 9-11 attacks.

And, yes, this school textbook is “dangerous” to Jewish interests because it opens the door to the ultimate truth — and there’s nothing that Jews fear — or hate — more than the truth.

Which is why, since the end of World War II, the Jews have become the world’s greatest censors and book burners — they created the so-called au-courant “cancel culture” to silence anyone who steps out of line and challenges their nation-wrecking agenda.

Each year, on the anniversary of the September 11 attacks, Jews get nervous — over the ‘inexplicable’ uptick in antisemitism.

With the 9-11 attacks, all roads lead to Tel Aviv.

And no amount of book burning and censorship will ever change that fact. 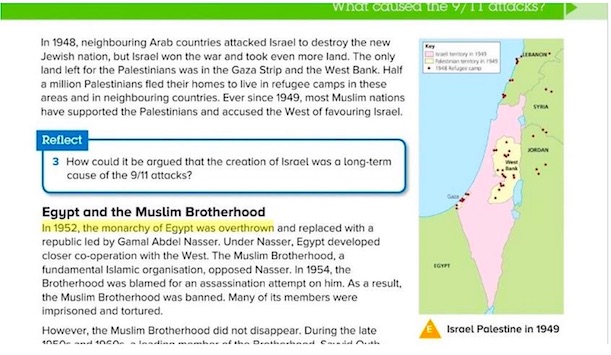