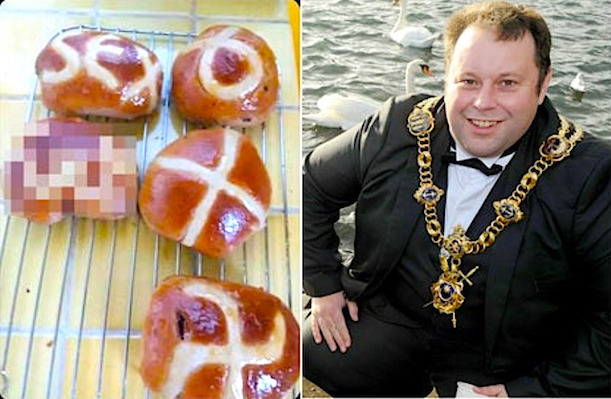 Non-stop Holocaust propaganda appears to be causing Jews in the U.K. to suffer from a derangement syndrome where they’ve become convinced that a councilman in Portsmouth who made a batch of of hot cross buns actually ’emblazoned’ one of them with a poorly executed ‘swastika’:

A Conservative councillor in Portsmouth has been suspended by his local party after allegedly posting images of a hot cross bun emblazoned with a swastika on social media.

Councillor and former Lord Mayor of Portsmouth Lee Mason admitted to baking the words “sex” and “f**k” into a tray of hot cross buns but denied having included the swastika.

Mr Mason alleges that the photo, which was originally shared on his Snapchat account, had been photoshopped and that he was the victim of a “deliberate” character assassination campaign.

“I baked some cakes, yes, but I haven’t done a Nazi symbol on any of them,” he said, “and there’s no Nazi symbols there. It’s not something I would find palatable in any way.”

Mr Mason, who represents Cosham on Portsmouth City Council, has been suspended by his local Portsmouth North Conservative Association pending the results of an investigation.

The photo, which shows five buns, was leaked to the The News and also included what the Councillor described as an Scottish National Party emblem.

The Campaign Against Antisemitism condemned Mr Mason and called for an immediate investigation.

It said: “Next week, the Jewish community will be observing Yom HaShoah, remembering the six million Jewish men, women and children slaughtered during the Holocaust just for being Jewish.

“The Jewish community and local residents in Portsmouth expect better from their representatives. The Conservative party must investigate this councillor’s conduct immediately.”

Labour’s Portsmouth South MP Stephen Morgan condemned the hot cross buns, saying: “At a time when our whole community is pulling together to support each other, anything suggesting the use of the most offensive of symbols is shockingly inappropriate and shameful.”

He also noted that the Councillor may face the prospect of an investigation by the City Council.

“If true, it may also breach the members’ code of conduct. It is only right that serious and legitimate concerns be reported to the city council under its complaints system for councillors,” he continued.

Not too long ago when England was still Christian, this councilman would have lost his job for making hot cross buns with the words ‘f**k’ and ‘sex’ on them — no one would even have noticed the poorly executed ‘swastika’.

Now that Jews have become firmly ensconced members of the social, political, and financial elite of England, politicians are free to be sexual deviants, but God forbid they make a joke about ‘Nazis’.

Sadly, the vast majority of Jews actually believe their own Holocaust propaganda, which is obviously causing them great psychological distress, believing there’s an ‘antisemite’ in virtually every woodpile in England — and elsewhere.

A so-called ‘scientific’ study actually claimed that Holocaust propaganda is so powerful that it has actually changed the physical structure of the brains of many Jewish survivors.

Many Jews have come to believe that if they don’t immediately stamp out any forms of ‘antisemitism’, no matter how trivial, it could bring about another imaginary Holocaust.

But given the political mileage and financial windfall they got off the first imaginary Holocaust, it’s hard to understand why they are trying so hard to avoid ‘another’ one.

Perhaps its as simple as they are worried they wouldn’t be able to get away with it a second time.