U.K. Man Convicted Of Hate Crime After Jew Calls Him A ‘Dirty Arab’ 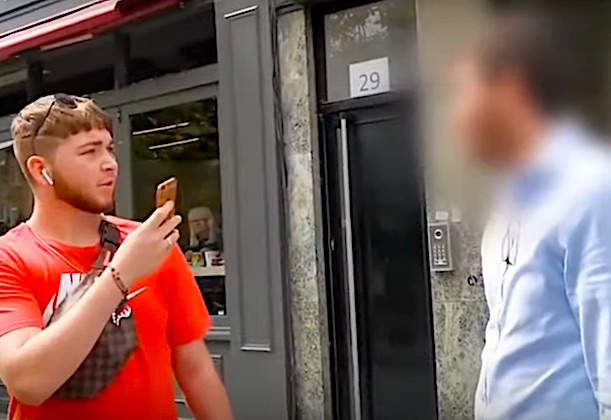 A U.K. man who retaliated against a Jewish family by calling them “dirty Jews” after they had first called him a ‘dirty Arab’, has been found guilty of racially aggravated assault and use of an antisemitic slur:

Adam Cassidy, 20, was filmed kicking an advertising board towards the family as they sat outside a Costa Coffee in St Albans. He also pushed their infant’s pram “aggressively” while the child was inside.

Mr Cassidy had pleaded not guilty to racially aggravated assault and to using the slur when he appeared at St Albans Magistrates’ Court in December. However, District Judge Margeret Dodd found Cassidy guilty of both charges.

Mr Cassidy claimed the group called him a “dirty Arab” first – which was not caught on camera – and that he was retaliating in kind, but his defence was rejected by magistrates.

“There are plenty of words you could have used if you just wanted to be rude; this was motivated by a racial motive.

“It was obvious that they were Jewish because of their skull caps and for that reason you said ‘dirty Jew’ three times.”

Ali Hussain, who defended Mr Cassidy, said his client had “never disputed using those words and has been entirely consistent throughout about the reason he has said what he said.

He added: “It’s unfortunate that a little bit more wasn’t caught on the video as that would have clarified the situation.”

Family member Michael Mendelsohn, who filmed Mr Cassidy’s tirade, told the JC that Mr Cassidy’s behaviour “was driven purely by racial hatred. He should have pleaded guilty from the outset. Instead he tried to excuse his behaviour with desperate lies which the judge saw straight through.

“I can only hope that the sentence reflects the seriousness of the crime and acts as a deterrent to other would-be offenders.”

Mr Cassidy was ordered to return to the court next month to receive his sentence.

As we previously reported on this case when it was initially being investigated last year, Jews are masters at portraying themselves as the victim after they’ve victimized someone else.

Only in the mind of an unstable Jew with a paranoid persecution complex do people just walk up to Jews, and for no reason whatsoever, assault them and call them ‘dirty Jew’ just out of sheer racial malice.

Every other group of people, especially White people, do specific things to make people hate them, but Jews apparently are uniquely hated even before they’ve taken their first breath.

This jewish ‘victim’ Mendelsohn clearly set up this Arab man, knowing full well that by provoking him by calling him a ‘dirty Arab’, he could elicit an ‘antisemitic’ response which he could conveniently capture on cellphone and make literally an internationally reported incident out of.

As one prominent jewish publisher recently observed, “Let me make a professional confession — in the Jewish world, anti-Semitism is like money in the bank. Whether we like to admit it or not, when we make a big deal of Jew-hatred, it boosts readership and fundraising.”

A day without antisemitism is like a day without sunshine for some Jews.  When they can successfully provoke someone into making an unguarded antisemitic comment, it confirms all their paranoid delusions of gas chambers and pitch fork-themed pogroms.

Jews have admitted that they need antisemites to feel jewish, which means they have to foment antisemitism on purpose when none is available.

And they’ve also admitted that their organized efforts to combat antisemitism actually create more antisemitism, which they seem to thrive on.  Perhaps we shouldn’t be so hesitant to provide Jews with this sustenance that they so desperately need.