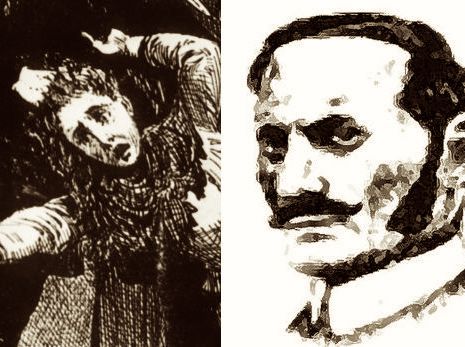 (Daily Mail) Another article allegedly identifying the “real” Jack The Ripper has appeared in the mainstream U.K. press, this time targeting an evil “Polish” immigrant as the hidden hand behind the infamous Whitechapel killings:

Jack the Ripper has sensationally been revealed as a 23-year-old Polish barber after fresh DNA tests were taken from a blood-stained shawl.

Aaron Kosminski was the notorious serial killer who hunted on the streets of Victorian London, according to scientists.

New evidence finds that two sets of DNA traces on the clothing matches that of both Kosminski and one of his murdered victims Catherine Eddowes.

The Polish immigrant lived with his two brothers and a sister in Greenfield Street, just 200 yards from where his third victim, Elizabeth Stride, was killed.

The identity was confirmed by researchers from Liverpool John Moores University who shared their findings in the Journal of Forensic Sciences.

They wrote: ‘We describe for the first time systematic, molecular level analysis of the only surviving physical evidence linked to the Jack the Ripper murders.

‘Finding both matching profiles in the same piece of evidence enhances the statistical probability of its overall identification and reinforces the claim that the shawl is authentic.’

Businessman Russell Edwards, 48, who bought the shawl at auction in 2007, contacted the scientists several years ago.

It had been found next to Eddowes’ body and was stained with what was believed to be her blood.

The serial killer is then rumoured to have eaten her kidney in a revolting and twisted act of pride.

Eddowes was the second woman to have died at the hands of Jack the Ripper that night – he had slit Elizabeth Stride’s throat an hour earlier.

Kominski was linked to the notorious killer in 2014 when Dr Jari Louhelainen, one of the authors in this week’s paper, studied the same shawl.

The ‘British’ press has been running stories demonizing Polish immigrants to England for years while at the same time giving a free pass to the Muslims — or giving the impression that Polish immigrants are equally ‘dangerous’ as Muslim immigrants.

And the impression they want to create about immigration is that ‘migrants’ are equally inter-changeable economic units, as Marx would describe them, whose ethnicity has nothing to do with their value as residents.

That said, ‘Aaron’ is not a common first name for ethnic Christian Poles, and even Wikipedia admits that Aaron Kosminski was a Jew — not an ethnic Pole.

Klodowa — the town in Poland where Kosminski was born — had a large jewish community, and some have speculated that Kosminski may have allegedly fled Poland to escape yet another Jewish pogrom.

So why does the story in the Guardian fail to mention that Kosminski was a Jew and not a “Pole”?  Need we ask?

Jews and Muslims are not your problem, goyim.  It’s “The Poles!”