U.N. Report Claims Gays Have The ‘Human Right’ To Be Accepted By Any Christian Community Of Their Choice 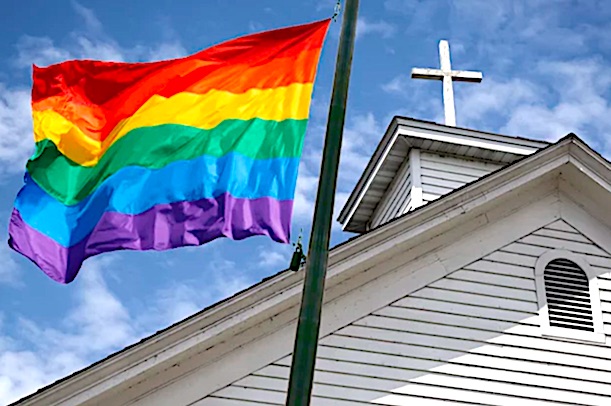 A recently published U.N. report on ‘freedom of religion’ argues that it is a vital part of respecting the rights of women and people who identify as LGBT that they are able to belong to a ‘faith of their choice’ without being ‘discriminated against’ for their ‘right’ to abortion and LGBT lifestyle:

The report goes on to claim that international law may recognize “the right of those persons to take part on an equal basis in the process of defining that community” — in other words, LGBT people and pro-abortion people may have the right under international law to redefine their faith community, whether it be Christian, Muslim, or Jewish.

The report, authored by Ahmad Shaheed, the U.N. special rapporteur on freedom of religion or belief, states:

‘For women and LGBT+ individuals, realizing religious freedom is often about realizing their agency and equality within religion. The Special Rapporteur submits that the ability of women, girls and sexual orientation and gender identity minorities to belong to a faith of their choice without being discriminated against, is vital to realizing their right to freedom of religion or belief, as well as their right to be free from gender discrimination.’

…The report calls for “transformational policies” in order to achieve “gender equality and full respect for the human rights of women, including sexual and reproductive health and rights.” These so-called “sexual and reproductive rights,” according to the report, are restricted by laws that institute “partial or total bans on access to abortion and contraception [and] prohibitions on assisted reproductive technologies and gender reassignment [sic] surgery” and that place limits on what Shaheed calls “evidence-based sexuality education.”

…According to the report, the obligation of states to “ensure gender equality” is not limited to the public realm but extends “into areas of religious life, where discriminatory practices impair the ability of women, girls and sexual or gender identity minorities to enjoy their human rights on an equal footing.”

…Several commentators have pointed out that the report stops short of ordering religions to change their doctrines. However, it is important to note what has been asserted: “women and LGBT+ individuals” must be able to belong to any religion of their choice, free from discrimination within that religion and to “enjoy their human rights [within religious communities] on an equal footing.” International law may recognize their rights to help define religious communities, and governments are obliged to go beyond the public realm and into “areas of religious life” to guarantee their rights.

In other words, if any church wants to maintain their 501(c)3 tax-exempt status, they will eventually be forced to accept any and all homosexuals and pro-abortion fanatics into their congregations who want to join.

This is the exact opposite of religious freedom, forcing sodomites and abortionists into Christian churches that don’t want them.

But gays have never wanted ‘freedom of religion’; rather, what they really want is ‘freedom from religion‘.

Keep in mind that Pope Francis is a huge supporter of the U.N. and its pro-LGBT policies — and the Church is now more interested in fighting global warming than abortion.  So don’t look for the Catholic Church to oppose this new draconian report.

And all this goes to show that the future of authentic, unadulterated Christianity will not be found in brick and mortar churches that now longer have the legal right to profess the faith.