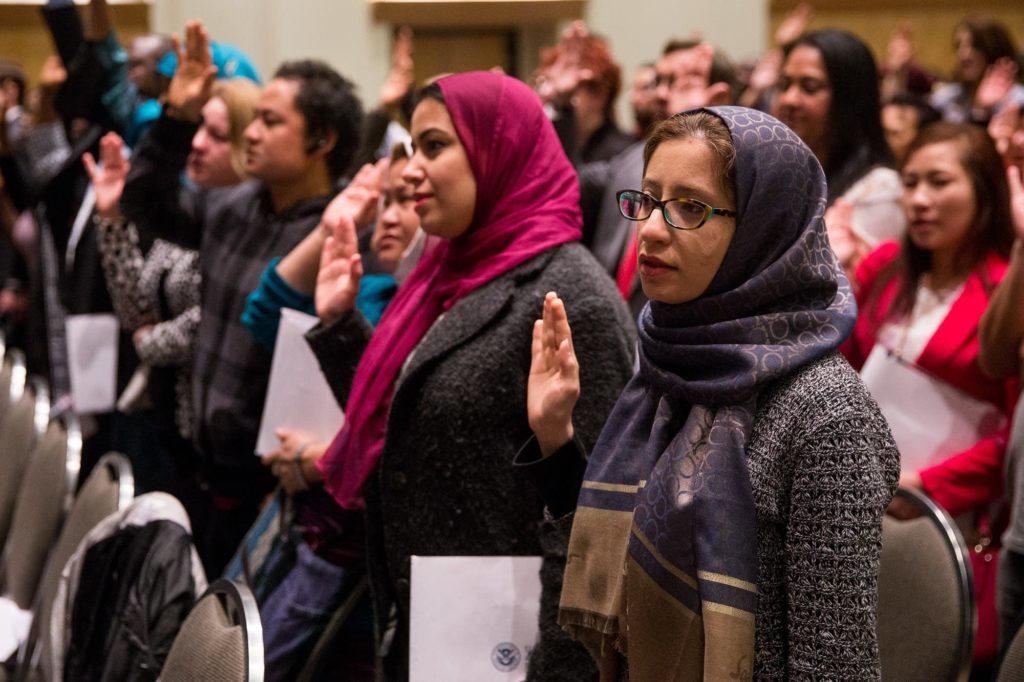 Contrary to what the media has been reporting, under the Trump administration the U.S. awarded citizenship to more non-Whites in 2017 than it did in the previous 5 years:

The latest figures followed slumping citizenship numbers during fiscal 2017, a period that includes the president’s first nine months in office, and mounting frustration from advocates who fear that the government’s “extreme vetting” will prevent people from becoming citizens in time to vote in the November midterms.
Recommended Video

U.S. Citizenship and Immigration Services (USCIS) spokesman Michael Bars said the agency had to keep up with a “record and unprecedented” workload of nearly 2 million applications in 2016 and 2017 and has rebounded by increasing staff, launching four new offices – including a larger application-processing center scheduled to open soon in Dallas – and expanding 10 others.

He said the backlog of pending applications more than doubled during the Obama administration, from 291,800 in September 2010 to nearly 700,000 in early 2017. Almost 9 in 10 citizenship applications were approved last year, similar to the rate under the Obama administration, Bars said. Final numbers for fiscal 2018, which ran from Sept. 30, 2017, to Oct. 1, are being tallied and could rise.

“For those seeking the great privilege of citizenship, this dream can and will become a reality if committed to seeing our lawful process through to completion,” Bars said. “This is a solemn promise we hold with the highest regard.”

During fiscal 2017, the number of newly minted citizens dropped 6 percent to 707,265, according to a Homeland Security report from August. (USCIS, a Homeland Security sub-agency, says its field offices reported a slightly higher total for that year, about 715,000, from a different tracking system.)

Democrats, local officials and lawyers from Utah to Georgia have called on the Trump administration to reduce its application backlog, which stands at 750,000, including thousands of applicants in the Washington, D.C. area. Wait times for citizenship applications have risen from six months under Barack Obama to more than 10 months now.

In September, several advocacy groups filed a lawsuit in U.S. District Court in Los Angeles asking a judge to compel the agency to turn over records related to the backlog. The groups allege that “extreme vetting” of citizenship applications was denying residents “the opportunity to more fully participate in civic life and to vote in important upcoming elections.”

“This is what we call the second wall,” said Gustavo Torres, executive director for CASA, one of the groups involved in the lawsuit. “This administration is creating so many difficulties for people to become U.S. citizens, they have discouraged them.”

Advocates have blasted Trump for seeking to curb legal and illegal immigration even as his immigrant in-laws became U.S. citizens in a ceremony this year in New York.

Federal officials say the government is properly vetting each applicant for citizenship and that delays can also happen because of scheduling conflicts or incomplete applications. They also have a higher workload than they used to: Applications soared from 783,000 in 2015 to more than 986,000 in 2017, a 25 percent jump that some analysts say was inspired in part by Trump’s anti-immigrant rhetoric.

In fiscal 2017, the most recent year for which detailed data is available, the largest numbers of new citizens were in California, New York, Florida and Texas, according to the Homeland Security report released last month.

Mexicans, whom Trump has often targeted in his speeches, were the largest group of new citizens – more than 118,000 – followed by India and China.

Buried within this article is a remarkable statistic — over 90% of these non-White applicants are being approved for citizenship.  How is it possible to adequately vet over one million applications per year when those applications contain information and “documentation” from Third World countries?  The short answer is that it’s impossible, and DHS knows it’s not possible.  If they did a proper vetting process, only a few thousand people would get in every year — and only from White countries.

And of course the Mexican activist claims that this virtual “open door” application process is another “Wall” that these poor “dreamers” must face.  Clearly we don’t need a “Wall” if we’re going to let in 700,000 non-Whites into our country legally.  That’s over 7 million in the next 10 years.  That’s over 20 million in the next 30 years, which doesn’t include the 20 million illegal ones.  This is why America will be brown by 2040, according to the U.S. Census Bureau.

No “Wall” is going to stop this legal form of subversion and self-destruction, and as long as America continues to be afraid of being called “racist” our country is headed for the dust heap of history.