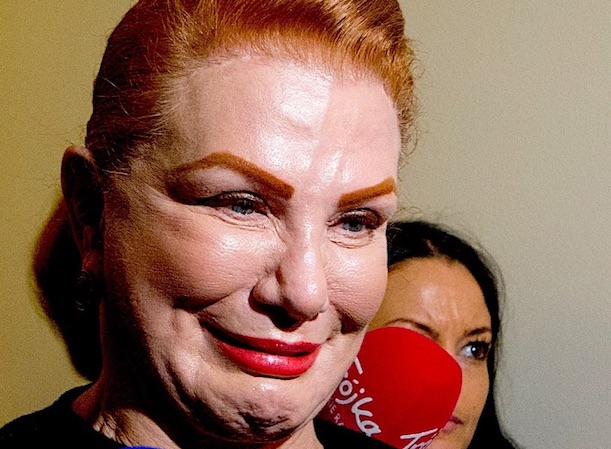 The U.S. Ambassador to Poland, Georgette Mosbacher, has been rebuked for meddling in Poland’s internal political affairs after she was a signatory of an open letter published by the U.S. Embassy in support of subversive LGBT activists in Poland:

In an interview for news portal Wirtualna Polska, US ambassador to Poland Georgette Mosbacher declared that Poland has the reputation of a country “unfriendly to sexual minorities”, which in turn negatively affects investment decisions and military issues.

She underlined that the majority of US politicians are on the same page when it comes to LGBT issues, including Donald Trump and Joe Biden.

The interviewer, Marcin Makowski, pointed out that in Poland, sexual minorities have exactly the same rights as people living in unofficial relationships and Poles do not like having foreign powers interfering with Polish legislation and imposing a definition of marriage.

Mosbacher responded, admitting that she “did not want to discuss legislative issues, as that is Poland’s private affair”.

The ambassador also emphasized that while she respects Catholic religion, human rights are more important.

When asked how she defines human rights and whether single-sex marriage is one of them, Mosbacher refused to comment.

The diplomat stressed that Poland must know that “in the case of the LGBT issue, you are on the wrong side of history. I’m talking about the progress which is being achieved despite everything.”

“It is not a secret that many congressmen are heavily engaged in LGBT issues. My opinion does not matter here – they make the laws and divide the money,” she said.

Mosbacher was also asked about former Foreign Minisgter Witold Waszczykowski’s comment on the issue, which emphasized that ambassadors are forbidden to interfere with a country’s internal affairs according to the Vienna Convention.  The diplomat stated, that while she agreed with Waszczykowski, the matter did not concern politics or ideology.

“No ambassador has a right to influence the policy of a sovereign nation, but human rights are not policy or ideology. We do not compromise on this issue, hence our appeal,” she said, adding that it was the Belgian ambassador who initiated the letter and that she had no influence over its content.

Georgette Mosbacher (née Paulsin) seems to have learned early on in life how to use her looks to bed and wed wealthy men — a practice that usually culminates in marriages to Jewish multi-millionaires such as her second husband, George Barrie, the owner of Faberge and 35 years her senior, and then the Robert Mosbacher, 20 years her senior, a Jewish wanna-be WASP who styled himself as genteel playboy, sailor and sportsman, apparently content to live off his father’s financial legacy.

Having spent most of her life around wealthy and powerful Jewish men, Georgette appears to have become a virtual Jew herself in her avarice, superficiality, and radical political agenda — a “Republican” in name only.

Social climbers like Mosbacher often develop a necessary addiction to plastic surgery — which appears to have distorted her features to the point that she has begun to resemble the transsexuals and female impersonators whose “rights” she now champions.

The most recent presidential election in Poland was centered around the issue that the so-called LGBT “movement” was indeed a Marxist “ideology” being used to undermine and destroy traditional Christian families — and Mosbacher knows this.

Jewish hand-wringers at the U.S. State Department have a visceral hatred for Christianity –and she has been more than willing to act as their political “waterboy” by pushing their anti-Christian, nation-wrecking agenda on Poland.

This bolshevik concept of “human rights” is far more important than Poland’s right to remain a Christian nation, despite the fact that without Christianity, nobody would have any “human rights” in the world today — and if these billionaire bolsheviks get their way, these “human rights” they bray on about today will suddenly disappear once they’ve achieved unopposed power and control.

Poland’s freedom depends on standing up to and resisting these Jewish incursions into their affairs — and these economic and military threats will escalate — but as long as Poland does not budge on their Christian national identity, they still have hope to remain White and relatively safe.