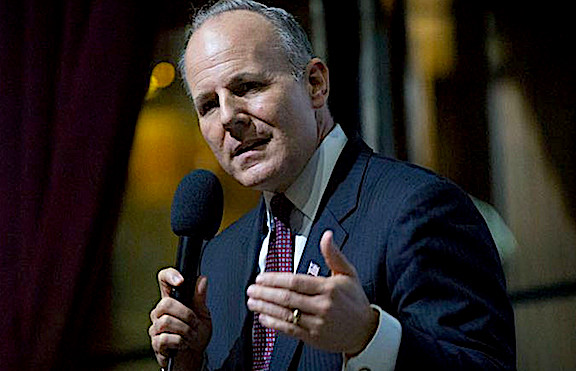 (972mag.com) Elan Carr — the U.S. State Department’s special envoy for monitoring and combating anti-Semitism — told a group of Israelis and Americans Tuesday night that in order to combat anti-Semitism, not only is teaching the Holocaust essential, the U.S. also needs to “educate on philo-Semitism”:

Philo-Semitism, which is sometimes referred to as “positive anti-Semitism,” is an inverse form of anti-Semitism that views Jewish stereotypes — including that Jews are smart, rich, and cunning — with admiration.

While on its face, philo-Semitism appears to cast Jews in a positive light, it effectively affirms the beliefs of anti-Semites while tokenizing and exceptionalizing Jews, often conflating them with the State of Israel.

In its essence, philo-Semitism, like anti-Semitism, sets the Jews apart as a group distinct from society at large, which is precisely what makes it so dangerous.

Speaking at an event organized by Tel Aviv International Salon, which describes itself as “the largest speakers’ forum in Israel,” and co-hosted by Times of Israel, Carr asked the crowd, which sipped wine from a Golan Heights Winery as they listened: “How can you tell the history of the U.S., or of France, Germany, Poland or England, without telling the history of Jewish people and the indelible contributions the Jewish people made to these countries?”

According to Carr, the U.S. is “still the most philo-Semitic country in world history,” seeming to indicate that despite the rising violent and often murderous anti-Semitism in the U.S., many Americans still love Jews as opposed to other countries around the world…

Carr called anti-Semitism a global “human sickness” and listed three main sources of it: far-right ethnic supremacists, radical left Israel-haters, and militant Islam. He associated the anti-Semitic murders in Poway and Pittsburgh’s Tree of Life Synagogue with the far-right, attributing right-wing violence to video game culture. The chief source of violence against Jews in Europe, Carr said, is militant Islam, which teaches hatred of Jews, and which he described as “mass child abuse” across the Middle East…

Carr then spoke about the way in which Jews are always blamed for anti-Semitism, stressing that hatred of Jews is “always the disease of the perpetrator.”

The world is not enough for these people who call themselves Jews.  Not only do they want to make it literally illegal to ‘hate’ or even criticize them, they now want to make it mandatory that we also love them.

They demand we treat them like an identifiable and protected minority, and then accuse us of antisemitism when we do.

Their ultimate goal is to make antisemitism a capital crime, just as it was when the Bolshevik Jews invaded and took over Russia.

It is an absolute necessity of jewish ‘survival’ that Jews are never held accountable for their actions for any reason.

If you hold Jews accountable for their actions, you are, according to the ‘official’ IHRA definition, a ‘diseased’ antisemite.

If they want to be loved and admired, they certainly aren’t going about it the right way.  It seems like they are the ones that need mandatory education in how to be loved by the goyim.