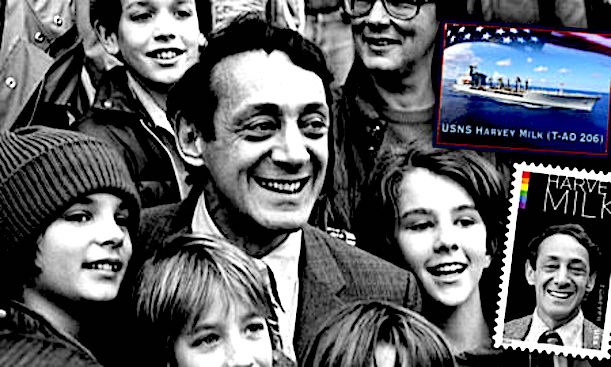 The U.S. Navy is constructing a ship named after jewish LGBT’ rights pioneer’ Harvey Milk, the former San Francisco Mayor who has been turned into a folk hero by the homosexual elite who run Hollywood and LGBT advocates worldwide:

“In the 1950s, Harvey Milk served in the U.S. Navy while stationed in San Diego. Today construction begins on the USNS Harvey Milk. We’re proud of the history Harvey Milk had in SD and that this vessel will represent freedom and acceptance here and abroad,” San Diego Mayor Kevin Faulconer wrote in a Tweet.

While Milk has been whitewashed as a hero, he – like many LGBT activists have shown in recent years – had a proclivity for young boys while he was alive according to reports.

Milk’s friend and biographer admitted that “Harvey always had a penchant for young waifs with substance abuse problems.” He was reportedly a statutory rapist who targeted the most vulnerable of children with his predations. One of his alleged victims was a 16-year-old runaway Jack Galen McKinley from Maryland.

In his [Shilts’] glowing book “The Mayor of Castro Street,” he wrote of Milk’s “relationship” with the McKinley boy: ”… Sixteen-year-old McKinley was looking for some kind of father figure…. At 33, Milk was launching a new life, though he could hardly have imagined the unlikely direction toward which his new lover would pull him.”

… Randy Thomasson, child advocate and founder of SaveCalifornia.com, is one of the nation’s foremost experts on Harvey Milk. Of the Shilts biography, Thomasson notes, “Explaining Milk’s many flings and affairs with teenagers and young men, Randy Shilts writes how Milk told one ‘lover’ why it was OK for him to also have multiple relationships simultaneously: ‘As homosexuals, we can’t depend on the heterosexual model.… We grow up with the heterosexual model, but we don’t have to follow it. We should be developing our own lifestyle. There’s no reason why you can’t love more than one person at a time.’”

Whereas McKinley, a disturbed runaway boy, desperately sought a “father figure” to provide empathy, compassion, wisdom and direction, he instead found Harvey Milk: a promiscuous sexual predator who found, in McKinley, an opportunity to satisfy a perverse lust for underage flesh.

So like many sexual predators and deviants in the LGBT community, Harvey Milk liked to drug and rape his victims because he knew that otherwise they’d have nothing to do with him.

And the same is true with society at large: we are first “drugged” by the jewish-dominated media with feel-good, virtue-signalling non-stop tolerance propaganda so that when the U.S. Navy dedicates a taxpayer-funded ship to a rapist, pedophile, and degenerate, we go along with it even though it doesn’t sit right with us.

But then again, of all the branches of the military, the Navy has a well-deserved reputation for being accommodating to homosexuals, so much so that 40 years ago they agreed to allow their ships to be used as a back drop for this overtly pro-gay music video with a song that has become an anthem at gay discos worldwide: