U.S. Senate Votes To Create ‘Ambassador-At-Large’ To Pressure Countries To Be More Tolerant Of Jews 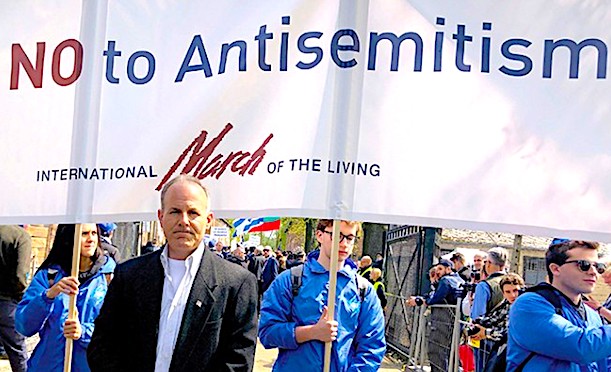 After a vote by the U.S. Senate, the State Department’s ‘Antisemitism Czar’, Elan Carr, will be getting pay raise and promotion to “Ambassador-At-Large” — and we will now be required to address him as “His Excellency“:

The U.S. Senate passed a bill that would elevate the position of the anti-Semitism monitor to ambassador, adding punch to the envoy’s mission of pressing other governments to confront anti-Jewish bigotry.

“Anti-Semitism continues to rise at an alarming rate across the globe,” Sen. Jacky Rosen, D-Nev., who led sponsorship of the bipartisan bill, said in a statement Wednesday after the vote, which passed unanimously. “To equip the State Department to better address rising anti-Semitism, it is critical that we elevate the role of the Special Envoy to Monitor and Combat Anti-Semitism to Ambassador-at-Large.”

The U.S. House of Representatives passed a similar bill last year, meaning it is almost certain to become law before the year ends and the current Congress lapses.

A broad array of Jewish groups backed the measure. With the status of ambassador, the envoy will have easier access to the secretary of state, increased funding and the office’s recommendations are likelier to be seen overseas as having the backing of the administration of the day.

“This legislation provides the Special Envoy to Monitor and Combat Anti-Semitism with the tools, resources and gravitas necessary to apply much-needed pressure on foreign governments to create more tolerant societies as part of their relationships with the United States,” Hadassah said in a statement.

The Orthodox Union said, “the Senate is providing powerful new tools to the State Department to lead impactful international efforts to combat what has been aptly called ‘the world’s oldest form of hatred’.”

The position of anti-Semitism monitor was created by Congress in 2004.

The only time Republicans and Democrats can agree on anything is when the Jews demand something — then miraculously they are able to vote “unanimously” on every issue set before them.

We are curious, however, to know exactly what kind of “much-needed pressure” that the U.S. State Department is going to exert on countries to force them into being more tolerant of Jews.

Are we going to start sending in the U.S. military if Poland continues to refuse to cough up billions in reparations to the Jews for “collaborating” with the “Nazis” to kill 6 Million™ Jews?

Are we going to cut off relations with the Netherlands because they refuse to return a valuable painting to a Jewish family who “lost it in the Holocaust”?

Perhaps we should invade Finland or Denmark if they ever vote to make non-medical circumcision illegal?

And Belgium might need a little taste of phosphorous bombs after they made the inhumane ritual kosher killing of animals illegal?

The oh-so convenient thing about “antisemitism” is that it’s so vague that it can mean anything that the Jews want it to mean — and this will keep the new Ambassador a very busy beaver, no doubt.