U.S. State Department To Demand Reparations On Behalf Of Jews For Holocaust AND Jewish Communism 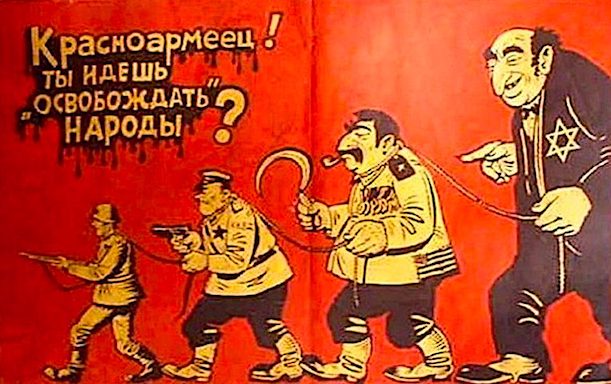 The U.S. State Department on Wednesday announced that it had completed the Justice for Uncompensated Survivors Today (JUST) Act report to Congress on progress countries have made on the restitution or compensation to Jews for property ‘wrongfully’ seized during the Holocaust and also Communism:

Secretary of State Mike Pompeo delivered remarks on the occasion, saying that “the legacy of the Nazis’ mass looting and subsequent Communist-era nationalizations […] remains largely unaddressed in too many places.”

“On July 29, the Department of State released a report to Congress pursuant to the Justice for Uncompensated Survivors Today (JUST) Act of 2017, which was adopted by Congress with broad, bipartisan support and signed into law by President Trump in May 2018.

“The JUST Act Report highlights the important actions taken by countries to provide restitution of or compensation for property confiscated during the Holocaust era or subsequently nationalized during the Communist era, consistent with commitments those countries undertook when they endorsed the Terezin Declaration at the conclusion of the Prague Holocaust Era Assets Conference in June 2009. The report also describes the vital work that countries are doing to commemorate the Holocaust, open archives, and promote Holocaust education in order to honor survivors and victims and to ensure such atrocities never happen again.

“As we mark the 75th anniversary of the end of the Holocaust and more than 10 years after the adoption of the Terezin Declaration, the legacy of the Nazis’ mass looting and subsequent Communist-era nationalizations of such property, remains largely unaddressed in too many places.

“The Report details the critical work that remains to be done to provide a belated measure of justice to Holocaust survivors and their families, and to Jewish communities destroyed by the Holocaust. Given the advanced age of Holocaust survivors around the world – many of whom live in or near poverty – the need for action is urgent. All victims of the Nazi regime should be able to live out their remaining days in dignity.

“When President Trump signed a landmark Executive Order on combatting anti-Semitism in December 2019, he also stressed the importance of strengthening restitution efforts. I am proud of the Department of State’s work in this area, which is led by our Special Envoy for Holocaust Issues, and I will continue to make it a priority.”

Yes, one of the best ways of ‘combatting antisemitism’ is to give Jews lots of cash — reward them over and over again for lying about their imagined victimhood.

As we reported last year, the Jews have begun also demanding ‘compensation’ for property they lost in Poland when the communists, who were largely Jews, stole everything not nailed down and justified it in the name of Karl Marx.

This hypocrisy is the very definition of ‘unmitigated gall‘ — or in Jewish parlance ‘chutzpah’ — but when it comes to extorting money, Jews have no shame.

And then they wonder why they are ‘hated’.

When the Anti-Defamation League first approached Senator Joseph McCarthy to investigate communist infiltration in the government, the ultimate purpose was to fool the American public into believing that communism wasn’t synonymous with Jews — the yeshiva posing as the FDR administration notwithstanding.

A certain Rabbi Benjamin Schultz coincidentally founded the false opposition organization American Jewish League Against Communism in 1948 just in time to testify in front of McCarthy’s committee to assure the 30 million ‘naive’ White American Christians who listened to Father Charles Coughlin on the radio every week that “not all Jews” were communists.

All was going as planned until McCarthy stumbled into the cabal of Jewish communists that had infiltrated Fort Monmouth in New Jersey — at that point even the Jew-friendly McCarthy couldn’t ignore the obvious any longer — which meant he had to be publicly denounced and eliminated with extreme prejudice.

Of course, Jews weren’t really against communism per se — they loved and supported their mass-murdering Bolshevik comrades in Soviet Yiddishland —  at least until Stalin turned on the Jews and started purging them from the Jewish-dominated Party.

But all the communists governments in eastern Europe were top heavy with Jews — not just Russia — and they were the ones ordering the theft — or ‘nationalization’ — of all private property — the vast majority of which was in the hands of Christians, not Jews.

But ever-forgiving Christians move on from whatever tragedies befall them while Jews obsess about the past — never forget, never forgive — and demand remuneration for every penny ever denied them.

Which is why Jews, against all common sense, will eventually be compensated for property that their own people stole from them under communism — and just as it has been with the “Holocaust” — the Jewish ‘victims’ will not be required to provide any documented proof of property loss — as all the records were, no doubt, conveniently destroyed.

After all, asking a Jew to prove their losses is insulting to their dignity and to their ‘true status as the world’s ultimate victims‘.

Here is a list of famous quotes made by Jews about communism — in their own words:

“Judaism is Marxism, communism.”
Harry Waton, A Program for the Jews and an Answer to All Anti-Semites (New York: Committee for the Preservation of the Jews, 1939), p. 64

“The communist soul is the soul of Judaism.”
Harry Waton, A Program for the Jews and an Answer to All Anti-Semites (New York: Committee for the Preservation of the Jews, 1939), p. 143

“The picture which the Soviet Union presents today is one that should bring rejoicing to world Jewry.”
The Youngstown Jewish Times, Sept. 18, 1936, page 51

“It would be absurd to deny the intensity of the Jewish participation in the Russian revolutionary movement.”
Leon Dennen, in The Menorah Journal (New York) July-September 1932, p. 106

“That achievement – the Russian-Jewish revolution – destined to figure in history as the overshadowing result of World War, was largely the outcome of Jewish thinking, of Jewish discontent, of Jewish effort to reconstruct.”
The American Hebrew, September 10, 1920

“The Bolshevik Government of Russia is the key-stone of the arch of the proof of the Jewish conspiracy for radicalism and world-domination.”
William Hard, The Great Jewish Conspiracy (New York: American Jewish Book Company, 1920), p. 31

“Jewry has come to wield a considerable power in the Communist Party.”
Dr. Avrahm Yarmolinsky, in The Menorah Journal (New York), July 1928, p. 37

“Karl Marx, who came from an old family of rabbis and brilliant Talmudic scholars, was to point the path of victory for the proletariat.”
L. Rennap, Anti-Semitism and the Jewish Question (London, 1942), p. 31

“Among his [Karl Marx’s] ancestors were Rabbis and Talmudists, men of learning and keen intellect.”
Henry Wickham Steed, in The American Hebrew (New York), December 9, 1927, p. 206

“The Bolshevik Revolution has emancipated the Jews as individuals.”
Dr. Avrahm Yarmolinsky, in The Menorah Journal (New York), July 1928, p. 33

“There is no Jew who does not hope with all his heart that the Soviet Union will survive and be victorious.”
Zionist Review (London: Zionist Federation of Great Britain and Ireland), September 26, 1941, p. 7

“Communism and internationalism are in truth and in fact great virtues. Judaism may be justly proud of these virtues.”
Harry Watan, A Program for the Jews and an Answer to All Anti-Semites (New York: Committee for the Preservation of the Jews, 1939), p. 80

“If the tide of history does not turn toward Communist internationalism … then the Jewish race is doomed.”
George Marlen, Stalin, Trotsky, or Lenin (New York, 1937), p. 414

“The [Jewish] Commissaries were formerly political exiles. They had been dreaming of revolution for years in their exile in Paris, in London, in New York, in Berlin, everywhere and anywhere. They saw in the Bolshevist Movement an opportunity of realizing the extreme ideas of Communism and internationalism to which their fate had compelled them.”
Dr. D. S. Pazmanik, in The Jewish Chronicle (London), September 5, 1919, p. 14

“The Jewish people will never forget that the Soviet Union was the first country – and as yet the only country in the world – in which anti-Semitism is a crime.”
Jewish Voice (New York: National Council of Jewish Communists), January 1942, p. 16

“Anti-Semitism was classed [by the Soviet Government] as counter-revolution and the severe punishments meted out for acts of anti-Semitism were the means by which the existing order protected its own safety.”
The Congress Bulletin, (New York: American Jewish Congress), January 5, 1940, p. 2

“The part which Jews play in the [Communist] Government of the country [Russia] does not appear to be declining.”
Harry Sacher, in The Jewish Review (London), June-August 1932, p. 43

“We Jews, we the destroyers, will remain the destroyers forever. Nothing that you will do, will meet our needs and demands. We will destroy because we need a world of our own.”
Maurice Samuel, You Gentiles, page 155

“The Russian intelligentsia . . . saw in the philosophy of Judaism the germs of Bolshevism – the struggle of … Judaism versus Christianity.”
Leon Dennen, in The Menorah Journal (New York, July-September 1932, p. 105