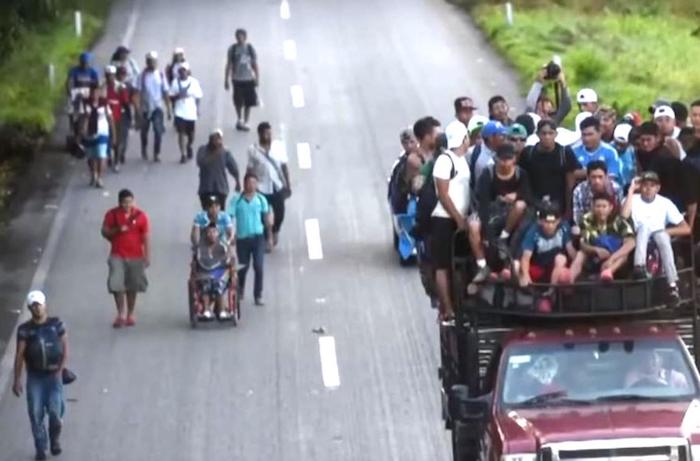 After receiving threats by latino students, the student government at the University of California-Berkeley voted unanimously to give financial assistance to the migrant caravan in Mexico that is attempting to illegally enter the U.S.:

The resolution passed Wednesday night was presented by the Associated Students of the University of California. Among other initiatives, the bill titled In Support of Central American Refugees in their Pursuit of Asylum proposed that the student government allocate $1500 to be donated to a non-profit organization with the intent of helping to fund the caravan.

These students urged the association to “put their money where their mouth is”…and asserted that a refusal to allocate the $1500 in caravan assistance funding would be “damn petty.”

The bill specifically referenced the Honduran migrant caravan, acknowledging that “while some have gradually arrived to the US-Mexico border, thousands are still en route and should arrive in the next week or two,” and calling on the student government to “be in solidarity” with these individuals.

The document details the plight of Honduran citizens and blames the state of Honduras on the United States. “The United States, fueled by corporate greed, has strategically intervened in Central American politics and warfare; thus strengthening the U.S. economy and further disregarding the livelihood of the citizens in these countries.”

Multiple Latino American students, one of whom stated that she was “undocumented and unafraid,” showed up to speak before the vote in an effort to persuade senators to pass the bill, some more aggressive than others. These students urged the association to “put their money where their mouth is” to prove their empathy for the migrants and asserted that a refusal to allocate the $1,500 in caravan assistance funding would be “damn petty.” Multiple students called the proposed donation the “bare minimum” that could be done by ASUC to support migrants.

“Get your shit together,” one student told senators. Another warned senators that a “no” vote on this bill would be “ignorant and violent.”

After these community members spoke, the bill was passed unanimously, approving not only the donation of funds to support the caravan, but also tasking the student government’s Office of External Affairs Vice President with “phone-banking and lobbying in support of both emergency and comprehensive immigration reform.” The bill states that this effort should specifically address asylum and visa application backlog and “ending the violent practices of our border patrol agents.”

Of course, all of the latino students at Berkeley are affirmative action admissions and have no business being at one of America’s “elite” colleges. But since all of these formerly-White universities are intent on destroying themselves in order to prove to the world and themselves that they aren’t “racist”, they have no choice but to allow these latinos into the school.  And the proof that these latinos don’t belong there is that they can’t even figure out that these invading Honduran migrants are an economic threat to their latino “brothers” who are already in the country — by watering down the unskilled labor market.

But this is what we send our kids to college for these days — to learn how to become social justice warriors and virtue signal with each other in a moral echo chamber about how much we hate our White ancestors and want to lift up the unwashed brown races.  And we’re willing to pay $50K per year for our kids to learn these valuable life lessons.  Of course after graduation, they’ll be moving back home until they are 30 because their degree won’t support a living wage, but at least they aren’t “racists” who “marginalize” people of color.