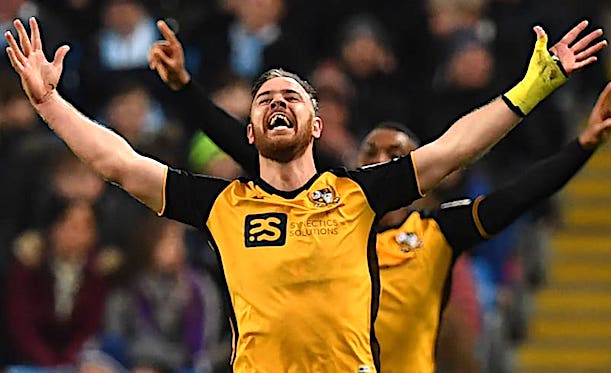 Tom Pope, a Port Vale forward, is facing a Football Association (FA) investigation for appearing to share a Rothschild ‘conspiracy theory’, hours after he scored in his side’s FA Cup defeat at Manchester City:

Tom Pope wrote early on Sunday morning: “We invade Iran then Cuba then North Korea then the Rothchilds [sic] are crownded champions of every bank on the planet – the end“.

That tweet created a storm on social media, leading other users to ask his predictions on other world events.

He tweeted the “Rothchilds” message, which has since been deleted, in response to a request to predict the end of a notional Third World War.

The Press Association news agency said it understands the FA “is looking into the matter” and could launch an investigation.

When warned by other Twitter users that his comments could be seen as racist, Pope responded: “I mentioned them owning the banks which is fact and now I’m facing all this”.

He added in another: “How is it racist?? Seriously is someone out to destroy me or what?”

One user told him: “Because Rothschild conspiracies have been used throughout history as a way of smearing the Jewish community and have quite rightly been identified as anti-Semitic.

“This myth in particular is one of the most commonly used and has been debunked thousands of times.”

The long list of Rothschild owned and controlled banks has been well-documented, and it probably comes as a surprise to the Rothschilds themselves when Jews, for no reason whatsoever, irrationally deny they own all the banks that they do.

It is rather amusing that Jews can brag about their power, and even publicly insist that they need to become even more powerful, but then turn around and claim that jewish power is a ‘dangerous canard’ that will lead to another Holocaust if not silenced.

In reality, America, as a proxy for jewish power, has been fomenting war against Iran on behalf of Rothschild interests for the last 40 years or more for the simple reason that it is one of the last hold outs forbidding the jewish banking cabal from controlling their currency and economy.

And that is the reason why this seemingly innocuous Tweet by this famous soccer player has become an international incident, deserving an ‘official investigation’.  The public must be kept in ignorance as to the real reason why war with Iran is ‘good for the Jews’.