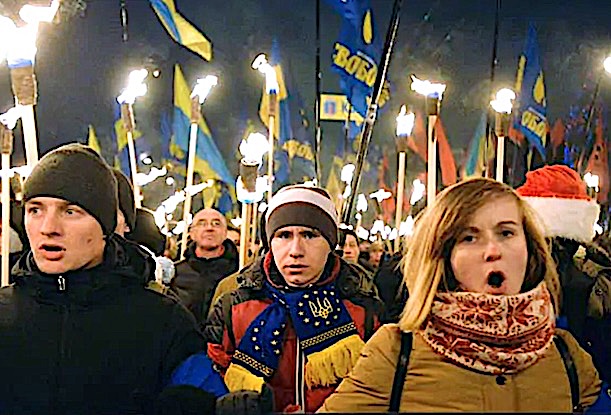 The Jerusalem Post is reporting that after Israel’s ambassador to Ukraine condemned the honoring of alleged Nazi “collaborators” in the former Soviet republic, dozens of people rallied outside the Israeli Embassy in Kyiv demanding that Jews apologize and repent for their role in orchestrating the 1930s genocide during which over 10 million Ukrainians were murdered:

The far-right activists called on Israel and the Jews to assume responsibility specifically for Holodomor, a famine that killed millions of Ukrainians in the 1930s and is widely believed to have been caused by the government of Joseph Stalin, then the leader of the Soviet Union.

“Israel deliberately spreads anti-Semitism in Ukraine,” one protester, a white supremacist activist named Vladislav Goranin, said during a speech at the rally. He said Jews and Israel must “repent for genocide” on Ukrainians.

The action was in response to Israeli Ambassador Joel Lion’s tweet Saturday in which he condemned a torchlight march in memory of Stepan Bandera, a World War II Ukrainian leader whose troops killed thousands of Jews and who for a time was an ally of Nazi Germany.

Ultranationalists in Ukraine and beyond have often blamed Jews for Holodomor, citing the support of many Jews for communism and the prominent positions of power that some of Jewish origins achieved under its rule in the Soviet Union — even though they were often involved in the persecution of other Jews for their faith, which Eastern Bloc Jews were often discouraged from practicing.

The Holodomor — where between 10 and 20 million White Christian Ukrainians were intentionally murdered through mass starvation and executions — was the brainchild of and orchestrated by the mass murdering Jew, Lazar Kaganovich,  aka “Iron Lazar”, aka “The Evil Dwarf” — who personally signed execution orders for literally tens of thousands of “counter-revolutionaries.”

Today, Jewry continues to hide and obfuscate the enormity of this genocide — going so far as to blame some of the mass murders on the Germans during World War II — a textbook Marxist strategy:

No apology from world Jewry will be forthcoming — as this article predictably points out, some murderous communists “just so happened” to have some “Jewish origins” — there’s nothing more to it — just more antisemitic scape-goating by the goyim.

Formerly, the communist takeover of the Ukraine was coordinated through the Jewish synagogues — the same place today where Ukraine’s vast organized crime network flourishes with impunity — nothing has changed except the labels.

Oh, and since these barbaric Jewish communists also “persecuted” some other Jews “for their faith” — then White Christian Ukrainians have nothing to complain about — it wasn’t personal.

All denials aside, communism in the Soviet Union — and the entire eastern Bloc — was top-heavy with ethnic Jews of the “greasiest type,” according to a telegram, dated March 1, 1919, by Captain Montgomery Schuyler of the Headquarters of the American Expeditionary Forces, Siberia, reporting to his Chief of Staff.

And just as it was 100 years ago, the western press is still under the control of communist-sympathizing Jews, as the above article from the Jerusalem Post clearly demonstrates.

Notorious communist sympathizer, American journalist John Reed — the subject of the flattering Hollywood biopic Reds — observed in his book Insanity Times how Jews in the media censor all opposition to their cause:

The censorship department, and that means the whole machine for controlling the home and muzzling the foreign press, was entirely staffed by Jews. There seemed not to be a single non-Jewish official in the whole outfit.

But let’s let some prominent Jews themselves tell us — in their own words — whether or not they have anything to apologize for — the genocide and social devastation wrought by this nation-wrecking ideology — an agenda which continues to this very day:

“Some call it Marxism, I call it Judaism.”
—Rabbi Stephen Wise, former Chief Rabbi of the United States, The American Bulletin, May 5,1935

“The Communist soul is the soul of Judaism. Hence it follows that, just as in the Russian revolution the triumph of Communism was the triumph of Judaism, so also in the triumph of fascism will triumph Judaism.”
—Rabbi Harry Waton, A Program for the Jews and Humanity And An Answer to All Anti-Semites (New York: Committee for the Preservation of the Jews, 1939), p. 143-144

“We must hate. Hatred is the basis of communism. Children must be taught to hate their parents if they are not communist.”
—Vladimir Lenin, Jewish communist

“We assert, therefore, that all these apparently differing systems of ideas have but one origin and one purpose. They originated in the mind of Jewry and are designed to destroy those who are so misguided as to give any credence to them. This being so, it follows that there is but one name to give to the destructive agency which the English Jewry and Judaism are one and the same thing.  To think of it as being “Socialism,” or “Communism,” or “Bolshevism,” or “Subversivism,” or any other “ism” than “Judaism,” is simply to render ourselves impotent from the beginning. For let us be thoroughly successful in removing any of these “isms” from the minds of men, we must make no mistake about it, so long as Jewry is left to disguise its activities under any suitable “ism,” so long will Jewry produce just as many more “isms” as can be removed, and probably of a far more dangerous character.”
—The British Guardian, September 1924

“You have not begun to appreciate the real depth of our guilt. We are intruders. We are disturbers. We are subverters. We have been at the bottom not merely of the latest great war but of all your wars, not only of the Russian but of every other major revolution in your history.”
—Marcus Eli Ravage, January-February 1928 issue of Century Magazine

“We [Jews] have erred, my friend, we have most grievously erred…. We who have posed as the saviours of the world, we who have boasted of having given it the Saviour, we are today nothing else but the world’s seducers, its destroyers, its incendiaries, its executioners…” .
—Dr. Oscar Levy, in preface to George Pitts-Rivers’ The World Significance of the Russian Revolution, Oxford University

“First of all, we have to understand what communism is. I mean, to me, real communism, the Soviet communism, is basically a mask for Bolshevism, which is a mask for Judaism.”
—Bobby Fischer, Jewish-American World Chess Champion

“The picture which the Soviet Union presents today is one that should bring rejoicing to world Jewry.”
—The Youngstown Jewish Times, Sept. 18, 1936, page 51

“It would be absurd to deny the intensity of the Jewish participation in the Russian revolutionary movement.”
—Leon Dennen, in The Menorah Journal (New York) July-September 1932, p. 106

“That achievement – the Russian-Jewish revolution – destined to figure in history as the overshadowing result of World War, was largely the outcome of Jewish thinking, of Jewish discontent, of Jewish effort to reconstruct.”
—The American Hebrew, September 10, 1920

“Jewry has come to wield a considerable power in the Communist Party.”
—Dr. Avrahm Yarmolinsky, in The Menorah Journal (New York), July 1928, p. 37

“The Bolshevik Revolution has emancipated the Jews as individuals.”
—Dr. Avrahm Yarmolinsky, in The Menorah Journal (New York), July 1928, p. 33

“There is no Jew who does not hope with all his heart that the Soviet Union will survive and be victorious.”
—Zionist Review (London: Zionist Federation of Great Britain and Ireland), September 26, 1941, p. 7

“If the tide of history does not turn toward Communist internationalism … then the Jewish race is doomed.”
—George “Marlen” Spiro, Earl Browder: Communist Or Tool of Wall Street: Stalin, Trotsky or Lenin (New York, 1937), p. 414

“The [Jewish] Commissaries were formerly political exiles. They had been dreaming of revolution for years in their exile in Paris, in London, in New York, in Berlin, everywhere and anywhere. They saw in the Bolshevist Movement an opportunity of realizing the extreme ideas of Communism and internationalism to which their fate had compelled them.”
—Dr. D. S. Pazmanik, in The Jewish Chronicle (London), September 5, 1919, p. 14

“The Jewish people will never forget that the Soviet Union was the first country – and as yet the only country in the world – in which anti-Semitism is a crime.”
—The Jewish Voice (New York: National Council of Jewish Communists), January 1942, p. 16

“Anti-Semitism was classed [by the Soviet Government] as counter-revolution and the severe punishments meted out for acts of anti-Semitism were the means by which the existing order protected its own safety.”
—The Congress Bulletin, (New York: American Jewish Congress), January 5, 1940, p. 2

“The part which Jews play in the [Communist] Government of the country [Russia] does not appear to be declining.”
—Harry Sacher, in The Jewish Review (London), June-August 1932, p. 43

“We Jews, we the destroyers, will remain the destroyers forever. Nothing that you will do, will meet our needs and demands. We will destroy because we need a world of our own.”
Maurice Samuel, You Gentiles, p. 155

“The Russian intelligentsia . . . saw in the philosophy of Judaism the germs of Bolshevism – the struggle of … Judaism versus Christianity.”
—Leon Dennen, in The Menorah Journal (New York, July-September 1932, p. 105

“Soviet Russia has declared war on Christianity, and on those who profess this faith. In the Russian villages today Bolsheviks and Herbert H. Lehman . . . were called the ‘secret government of the United States’ and were linked with ‘world communism.’”
—Dr. Louis Harap, in Jewish Life (New York), June 1951, p. 20