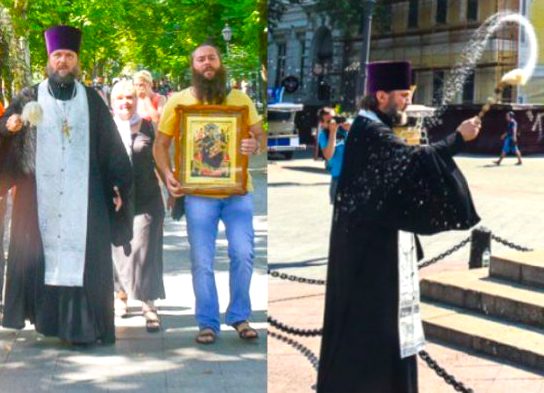 LGBT pride parades are not particularly noteworthy these days, but what happened after the parade this weekend is: an Eastern Orthodox priest visited the parade site and cleansed the space with holy water:

The head of the Missionary Department of the Eastern Orthodox Diocese of Odessa Fr. Oleg Mokryak led the cleansing, with help from a group of laypeople. Together, the dispensed holy water on people, the road, and on monuments as they walked, explaining to onlookers that they were specifically cleansing the area following the LGBT parade.

Holy water has long been a powerful sacramental used by Christians. St. Teresa of Avila attested that “from long experience I have learned that there is nothing like holy water to put devils to flight.”

Last year, the priest who visited the room from which someone shot into a crowd in Las Vegas killing 58 people and injuring hundreds reported feeling a malevolent presence in the room and cleansed the room spiritually with holy water.

Unlike the Catholic Church, the Eastern Orthodox Church has largely resisted the LGBT agenda and openly opposes it in public.  If this were in western Europe or Canada, this Orthodox priest would have been arrested for a ‘hate crime’.  Gay rights trump religious rights, and even quoting the Bible’s prohibition against sodomy can now land you in jail in many countries in the liberal West.  Even opposing abortion as a “fundamental human right” is now considered a form of misogyny.

Don’t expect homosexuals to ever stop and question why they are being encouraged to be “prideful” that they engage in sodomy.  After all, basing one’s identity on deviant sexual practices seems like a perfect way to undermine society while glorifying behaviors that no self-respecting parent would ever want their children engaging in.  But no homosexual would ever admit to themselves that they are being used as proxy social warriors to undermine the traditional Christian foundations of European society.