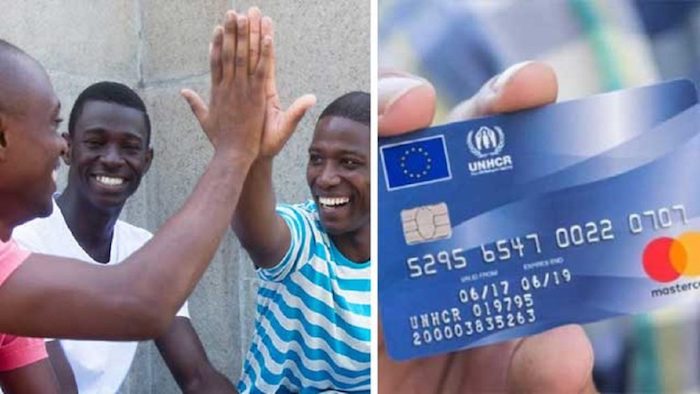 According to the Slovenian news site Nova24, a joint program between the UN, EU, and George Soros is funding pre-paid debit cards which are handed out to migrants to help fund their invasion of western European nations:

How illegal migrants cope financially during their long journeys to and through Europe has been revealed by the Slovenian site Nova24.

According to the news site, [UN High Commissioner for Refugees (UNHCR)] and the EU, in cooperation with MasterCard and Soros, generously hand out prepaid debit cards to the migrants.

The cards are equipped with both EU and UNHCR logos. No identity documents are required to obtain or use the cards – instead of the name of the cardholder, “UNHCR” and a number is printed on the card.

According to Nova24, the information comes from a source within the Croatian police, which states that the migrants are well-equipped with newly purchased, high-quality boots, hiking clothes, smartphones and even weapons.

During the stopover in the Eastern European countries, they withdraw cash from ATMs to stock up on supplies.

MasterCard announced in 2016 that they issued prepaid debit cards to “give refugees mobility, flexibility and dignity”.

In a press release last year, MasterCard also announced a cooperation with George Soros with the aim to “catalyse and accelerate economic and social development for vulnerable groups in the world, especially refugees and migrants”.

The press release further stated that George Soros had earmarked up to $500 million for private investment that will increase capacity to meet the challenges faced by migrants, including refugees, and their host communities across the world.

Why isn’t Soros handing out pre-paid debit cards to homeless White people in Europe?  That’s a racist and antisemitic question, and if you ask it, you may be thrown in jail for inciting “hate”.  The “dignity” of White homeless people is of far less a concern as the “dignity” of these Muslim and African freeloaders.

How will these migrants get all the way to Sweden and the UK to participate in gang rapes if they can’t afford to get there in the first place?  Gang rape is now considered a basic “human right” in western Europe, and leave it to George Soros to make sure that those rights are vigorously defended and financed.

Some Europeans might be outraged to find out about this act of jewish treachery, and they might even be tempted to suggest that Soros be arrested for treason by any number of European countries, but anyone who suggested such a thing would immediately be smeared as an antisemite, and there is nothing more terrifying than to be accused of antisemitism, and that fear alone will motivate most White Europeans to keep their mouths shut about this subversion.