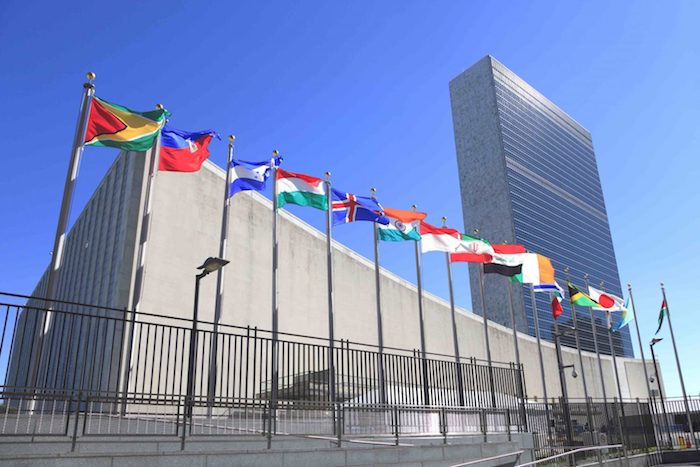 As part of the Holocaust and the United Nations Outreach Program, the U.N. has published a paper by jewish professor Zehavit Gross, who argues that Holocaust education programs are to be used to promote the jewish multicultural, anti-White agenda:

The United Nations also recognized its responsibility to highlight the vital educational issues of global citizenship and human rights, which today are as pressing as ever, if not more so. It acknowledges the need to develop a new cosmopolitan memory of the Holocaust that transcends ethnic and national boundaries – a memory that is not only connected to the past but also to a common future. A murky wave of xenophobia, racism and hatred is flooding the world, and educators must mobilise to resist it.

The future of Holocaust memory and education lies in its ability to be relevant to the students of coming generations. While study about the Holocaust is important in and of itself, it is even more important to learn from the Holocaust in terms of promoting global citizenship, human rights, religious tolerance and multiculturalism to ensure that such evil does not occur again.

In many locations worldwide, the Holocaust has become a universal symbol of evil. Just as the story of the Exodus from Egypt from the Bible, and the catch cry “Let my people go” epitomises moving from slavery towards freedom, the Holocaust is now the defining symbol of the most terrible denial of basic human rights—an evil that we struggle to comprehend.

Paradoxically, we can transform teaching about the Holocaust from a subject of despair to a subject of hope. We can convey to our students the message that the option of preventing the next Holocaust is in our own hands. Our students can take specific steps to counter racism and hatred on a local, granular level and this will impact at the universal, international level.

In this way, adolescents can become agents of change. The most important educational message of tikun olam, repairing the world, is that we must not be indifferent, we must not be bystanders, because indifference is lethal. We have to act! We must be agents and facilitators against the evils of discrimination, prejudice, hatred and violence. All teachers need to equip their students with the intellectual and practical tools to deal with complex historical situations.

Thus Holocaust Education should be constructed in such a way that the world can counter hatred—whether based on race, ethnic background, colour, gender or religion.

As usual, this jewish “professor” doesn’t tell us the whole story about what “tikun olam” really is: it’s not just “repairing the world,” but rather it’s creating a Jewish World Order which is based on jewish values — a complete judaizing of the world where no one opposes the jewish agenda.  An example of “tikun olam” is the Bolshevik Revolution where Jews invaded Russia and killed millions of White Christians and held the rest captive under jewish terror organizations like the Cheka and NKVD.  This is what awaits the world when the Jews finally remake it in their image.

This Holocaust rhetoric is used in the jewish-controlled mainstream media every day, and its used to justify our “tolerating” the intolerable jewish agenda talking points: transgenderism, unrestricted Third World immigration, hate speech laws, gun confiscation, and every liberal fantasy.  The Holocaust is not a historical event — it’s a jewish weapon of mass destruction.