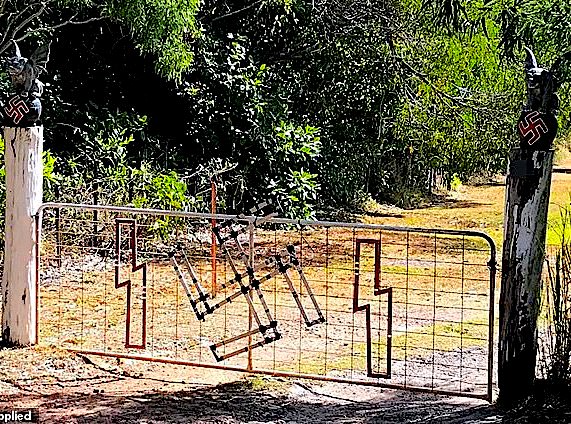 The Anti-Defamation Commission, a powerful Australian Jewish supremacist group, allegedly expressed ‘horror’ after a 71 year old Jew who claims to be the child of ‘Holocaust survivors’ allegedly saw a swastika and Nazi SS symbols on the front gate of a private property in Queensland:

The 71-year-old woman commented on the sight, “Both my mother, father, and stepmother survived the horrors of the Holocaust and subsequently lost their parents, siblings, large extended families, friends, and their entire communities. This sight turned my stomach and made me furious that, in this day and age, we still have people advocating for genocide.”

“I love Australia,” she said, “but I feel robbed because so many people must have seen this outrage and no one voiced their objections.”

“I believe that those who displayed this disgusting signage should be charged with incitement to murder,” she added.

Dr. Dvir Abramovich, the chairman of the Anti-Defamation Commission (ADC), commented, “Who would have thought that in Australia 2020 we would see a gate that belongs in Hitler’s Germany? For a Holocaust survivor, this hellish sight is their worst fears realized and would be as scary as being threatened with a gun.”

“Anyone who believes in our nation’s shared values will be outraged by these signs that are dripping with venomous hate and are a call for murder,” he said.

“It is spine-chilling to think that walking amongst us are ‘Final Solutionists,’ individuals who dream of a Fourth Reich and who are proud to openly celebrate Hitler’s evil legacy which led to the gas chambers where millions of men, women and children were horrifically slaughtered,” Abramovich added, calling it “a punch in the gut of every Holocaust survivor, and a spit on the memory of the victims.”

Abramovich, who is leading a campaign to legally ban the swastika in Australia, said, “Now is the time to act and to send the unmistakable message that Nazism has no place in Australia. Once the Covid-19 crisis is over, I call on the Queensland government to once and for all close the lid on this disgusting phenomenon and to outlaw the public display of any symbol of the Third Reich.”

Of course, this anonymous 71 year old woman — if she actually exists — is NOT a “Holocaust” survivor, as the ADC’s Dvir Abramovich contends, but is merely the daughter of Jews who survived World War II just like millions of others living in Europe at the time.

But the anti-German Jewish wartime atrocity propaganda in WWII was so successful that this woman can no longer tell the difference between reality and scientifically and logistically impossible tales of industrial scale genocide.

If the swastika symbolizes anything today, it’s the deep-seated hysteria created in the minds of Jews who have been subjected to non-stop improbable tales of Nazi evil from cradle to grave.

On the other hand, it is an indisputable historical fact that 60 million White Christians were systematically murdered by Bolshevik Jews in Russia, but survivors — and descendants of survivors — don’t go off the rails when they happen to see the Star of David.

Fortunately, many Jews have begun to question the implausible Holocaust lore, while other Jews have followed in the footsteps of former U.S. Supreme Court Justice, Felix Frankfurter, and rejected it outright — so as not to lose their grip on reality.

Yes, this story comes to us courtesy of the same Dvir Abramovich of the ADC who previously admitted that when Jews like himself attempt to combat antisemitism, they create more antisemitism.