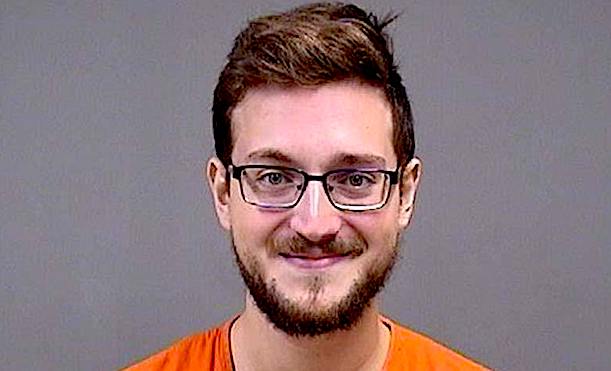 James Reardon, 20, was being held on $250,000 bond on Sunday on charges of aggravated menacing and online harassment, according to records from the Mahoning County Sheriff’s Office, for allegedly threatening a local jewish community center in Youngstown, Ohio:

Reardon was arrested in his hometown of New Middletown late on Friday after investigators became aware of a post on Instagram that appeared to threaten the Jewish Community Center of Youngstown, according to a statement from the Youngstown Area Jewish Foundation.

A user named “ira_seamus” uploaded a video in July showing a man shooting what looked like a semi-automatic rifle, with the sound of screaming and sirens audible over the gunfire. The caption read, “Police identified the Youngstown Jewish Family Community shooter as local white nationalist Seamus O’Rearedon.”

“We subsequently learned that ira_seamus was an online pseudonym for James Patrick Reardon,” Andy Lipkin, the Jewish federation executive vice president, said in a statement. Lipkin said he and other federation officials stayed in “constant contact” with local authorities and the FBI on Friday evening while arranging for increased security at the JCC and other area facilities….

Other posts on the Instagram account included anti-Semitic and racist comments, according to WYTV, a local ABC affiliate in Youngstown.

Reardon participated in the violent white nationalist rally in Charlottesville, Virginia, in 2017, the station reported.

This case is obviously going to be used to justify new draconian “Red Flag” or “Minority Report” laws where police will begin arresting people before they’ve committed any crimes, and apparently just calling yourself a “White nationalist” is now enough to give the FBI justification to monitor your activities, legal or otherwise.  It doesn’t take a rocket scientist to understand that Reardon just handed the Cheka at the ADL the justification they’ve been looking for to justify the suspension of the U.S. Constitution.

Jewish watchdogs in the media love these cartoonish White nationalists because it is so easy to make them look like mentally unstable and violent social misfits, which is exactly what this clown Reardon appears to be.  And if he thinks he’s going to help “make America great again” by threatening Jews and wishing that America will one day magically turn White again, he’s greatly mistaken.

America was a great nation when it still insisted on being Christian — not “judeo-Christian” but rather un-hyphenated, unapologetically Christian.

When Americans arrogantly decided sometime in the 1960s that America could still be a great nation and a White nation without being Christian, they basically handed this nation over to its enemies on a silver platter, just as Reardon has done as he sits in his jail cell.