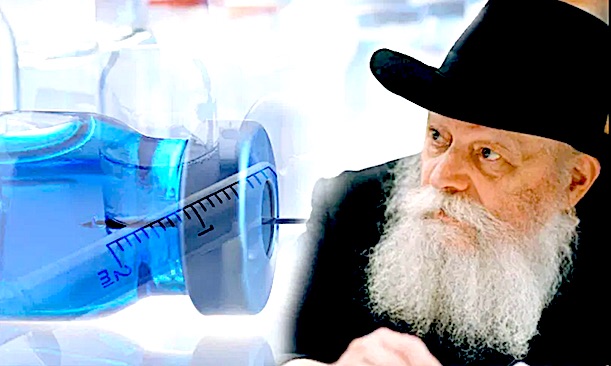 Despite the relentless COVID propaganda in the Israeli press — including Prime Minister Netanyahu allegedly agreeing to be the first in Israel to be vaccinated — the vast majority of Jews in Israel do not plan to get the COVID vaccine when it becomes available to the public in late December:

Israelis who choose to get vaccinated against coronavirus will receive “free movement” waivers, allowing them to bypass certain health restrictions, the Health Ministry has said.

Prime Minister Benjamin Netanyahu said last week that Israel will begin administrating coronavirus vaccinations on December 27 and that Israel was ready to vaccinate 60,000 people a day. Thousands of doses of the Pfizer vaccine arrived in Israel last week via special charter flights.

The so-called “green passports” will be handed out only after the second shot is administered since Pfizer vaccine requires two jabs in order to be effective.

Holders of the passports will be able to attend public events and eat at restaurants among other things, Health Ministry Director-General Chezy Levy told Channel 12 on Sunday.

Health Minister Yuli Edelstein, meanwhile, told Channel 13 the idea behind the plan was not to grant privileges to the “green passport” holders, but to make sure they can engage in activities that are potentially dangerous for those who had not been immunized.

Recent polls reveal 50% to 75% of Israelis are unwilling to take the jab, mostly due to concerns over how fast it had been developed.

The Health Minister is lying — of course the idea behind the “vaccine passports” is to incentivize people into getting these untested and potentially deadly vaccines — Bill Gates all but admitted that has been the plan all along.

And from the average Israeli’s perspective, their families “survived” the so-called “Holocaust”, including grotesque “medical experiments” at the hands of Josef Mengele — along with having their gold teeth stolen from them by the Nazi dentists to fund Hezbollah — so they aren’t about to die in a real Holocaust with these deadly vaccines.

No one understands how 6 Million Jews™ could have willingly agreed to be “genocided” by the Nazis without barely fighting back — but now they have a chance to redeem themselves and show the world that they aren’t the cowards they’ve been eternally depicted as by their own Holocaust historians — they can now stand up and show the world that they will not agree to this gruesome depopulation plan that was meant for the goyim — not the sacred remnant in Israel.

Let the goyim be the guinea pigs — see how many of them drop dead or develop debilitating diseases before a single sacred Jew agrees to the vaccine — that’s what the goyim are for, after all.

Elderly Jews in Montreal nursing homes apparently will be the first guinea pigs to have the “privilege” of being “culled” by the COVID vaccine.

Recently, Shmuel Eliyahu, a prominent rabbi encouraged “everyone” in Israel to get the COVID vaccine — even after acknowledging that people had already died and were injured in the vaccine trials, he still encouraged Jews to “trust” the experts in the following rambling, incoherent statement:

Medicine and vaccines prove themselves. All those who speak badly about them – have not proven themselves in saving lives. Therefore the halakha (Jewish law) says that you trust vaccines, you trust drugs. You trust the health systems. You do not hear at all all people who scare and encourage not to get vaccinated. They are playing with the lives of others, and perhaps also their own lives.

These radical new mRNA vaccines are all developed using aborted fetal tissue — from dirty “goyim” fetuses — and these cannot possibly be “kosher” for any self-respecting Jew to be injected with.

Ironically, the Orthodox communities are overwhelmingly against vaccination and irrational and illegal government lockdowns — yet they are portrayed in the secular Jewish press as “anti-science”, “irrational”, and “superstitious” — like any goyim  “anti-vaxxer”.

The pandemic plan was to make Israel appear to be the “light unto the nations” — being the first to eradicate this fake virus — but with so few Israelis agreeing to be guinea pigs, they will have to resort to Plan B — which will be to rig the PCR COVID tests so that everyone tested comes back negative, falsely claim 70% vaccine compliance, and declare the emergency over.

And hopefully, the goyim will be dumb enough to believe them.