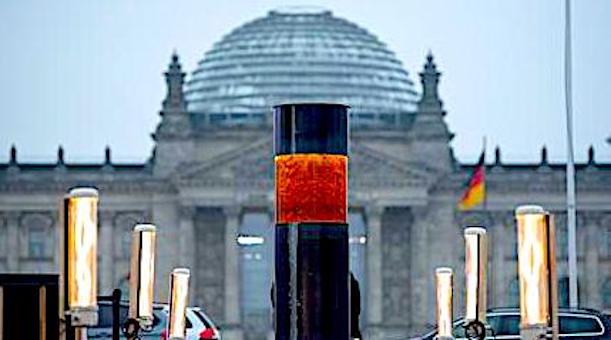 The Center for Political Beauty, a German activist organization, placed a large urn-like container outside Germany’s parliament building which allegedly contains the ashes of jewish victims of the Nazis:

The message of the art-activist collective Zentrum für Politische Schönheit, or Center for Political Beauty, is that the government should not work with the far right, the German news service Deutsche Welle reported.

The gray cylindrical column is partly illuminated from the inside with an orange light which allows viewers to see the soil sample.

The group said it spent two years digging up soil from 23 sites across Germany, and in Poland and Ukraine, including at the Auschwitz, Sobibor, and Treblinka Nazi camps, where Nazis were active in the mass murder of Jews and others. Lab results found traces of human remains in over 70 percent of the 240 samples, the group said in a statement. “At one of the horrific sites we found ashes and bone char a meter deep. This column contains the (drill) sample from this soil that has been preserved for all eternity,” according to the group, Deutsche Welle reported.

The Central Council of Jews in Germany and the International Auschwitz Committee condemned the urn and its contents.

If this group were going around to different concentration camps and digging up soil samples, you can bet your bottom jewish Federal Reserve Note that Holocaust groups would have had a major kanipshin, and this group would have been arrested and publicly shamed.

As we’ve previously reported, the Jews do not allow any alleged remains from so-called Holocaust victims to be dug up anywhere for any reason, including by other Jews.

The reason for this is simple: there have never been any mass graves of Jews from the Holocaust, and that would easily be proven if people started poking around the so-called ‘hallowed ground’ of these designated atrocity sites.

Regardless, if a jar full of fake human ashes can convince the German parliament to continue to allow the country to be flooded with Third World migrants, they have no future as a nation and might as well hand over the keys to the future Caliphate of Germany to the Jews.

Here Gideon Falter, a radical jewish activist in England, explains why the evil “Nazis” wanted to exterminate the Jews: