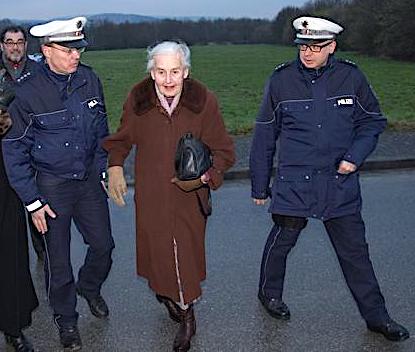 A Canadian human rights group has received a letter of thanks from Ursula Haverbeck, the German grandmother who will be  spending her 91st birthday in prison for daring to challenge the Jewish Version of World War II:

Today I have received a letter from the brave campaigner from Truth in History, Ursula Haverbeck. Ursula expresses her astonishment and thanks for the amazing number of letters and cards of support that she receives from Britain and from France, and indeed from the whole world. In her letter to me Ursula H. singles out her specific thanks to Michele R. and to Peter R.

Let me repeat here, that letters and cards of support are a God-send to every brave and honourable patriot locked up in a narrow prison cell mixed in together with anti-social types and criminals, and isolated from the world and friendly faces – that’s prison, and in this nightmare “modern” world many of the prisoners will be Third-world criminals with Third-world personal habits.

All the more reason to send a friendly, cheerful card or letter, (which does not have to bear the address of the sender) to our brave Ursula:

Note on a related matter: The Jewish community in Bielefeld has raised its objections to a parade through the town, which friends and supporters of our Ursula have planed for next month, to commemorate her 91st birthday, that the astoundingly vigorous Ursula Haverbeck will “celebrate” in the Bielefeld prison (JVA).

The Jewish accusation that the Germans allegedly murdered 6 million Jews during a brief two and a half year period in World War II is tantamount to a “blood libel,” and these false accusations have never been allowed to be publicly debated or refuted by the accused Germans.

All Christians should be aware that Satan is the “false accuser”.

Ursula Haverbeck has decided to do just that: defend the German people against this false blood libel.

The Jews have literally made it an imprisonable offense to challenge any aspect of their spurious claims of genocide, so much so that even if you are telling the truth, you will still go to prison, as if you are a character in a novel by the Jewish writer Franz Kafka.

As you can see below from watching the “offensive” and “illegal” interview with Ursula Haverbeck which landed her in prison, she can prove every single fact she brings up with documented proof that would indeed stand up in court and would be accepted by any credible historian of World War II.

This Orwellian nightmare that Haverbeck is living is proof that the Jews themselves are responsible for “antisemitism”, as this kind of ruthless form of oppression will always create resentment against Jews, which may in some cases boil over into violence, which, despite all their protestations, they welcome as it becomes prima facie evidence that even more draconian repression and punishment is necessary to silence their “antisemitic” critics.