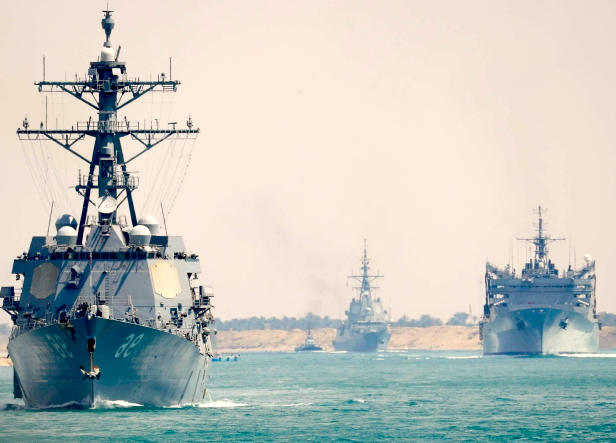 The US is assisting the UAE investigation after a reported sabotage operation targeted four vessels in the Gulf of Oman late on Sunday:

A US defence official told Reuters on Monday that the “US military is assisting in the investigation on the attack on the commercial vessels near Fujairah emirate, just outside the Strait of Hormuz.”

The State Department, like the UAE government, has remained tight-lipped about the exact nature of the incident.

A US coast guard statement on Sunday indicated that a “maritime incident” had been reported off the coast of Fujairah.

“The nature of the event is reported to be attacks or sabotage on one or more vessels,” the statement said. “The precise means of attack or sabotage is unknown.”

The coast guard advised vessels to “exercise caution when transiting this area” until Sunday, unless another alert is issued.

The incident has raised concerns among former US officials and security experts over threats to maritime security, the potential impact on the global economy and energy transit in the Gulf region.

“Reports of hostile actions against oil tankers in the Gulf are extremely worrisome,” said Stephen Seche, a former US ambassador to Yemen and executive vice president of the Arab Gulf States Institute in Washington.

“It is imperative at a moment of such peril that all nations exercise caution and prudence as investigations continue into the incidents and what caused the damage suffered by these ships.”

Following an investigation and if “sufficient evidence emerges to enable conclusions to be drawn regarding responsibility for these apparent attacks, the international community should use the mechanisms available to it through the United Nations to respond resolutely to ensure the safe transit of energy supplies essential to the global economy,” he added.

The timing of the incident makes the sabotage off Fujairah even more alarming and increases the risk of miscalculation, as tensions between the US and Iran escalate and Washington dispatches two warships to the Gulf waters, said Ryan Bohl, a middle east and north Africa analyst at US intelligence firm Stratfor.

“Given that tensions are as high as they are, an accidental escalation is likely from an incident like this,” Mr Bohl said.

Sure, the coming “escalation” of this conflict will be “accidental”, which is how the Israel-friendly press will spin it, no doubt.  Experts are “tight-lipped” about this staged incident because they are probably testing to see which way the winds of public opinion and speculation are blowing before they commit to their next move on the chessboard.  Part of the strategy of pulling off these false flag events is dealing with the fact that millions of people are going to know that it’s a false flag, but they get away with it anyway, which is exactly what happened on 9-11.

We have to hope that those who are contemplating “escalating” this fabricated confrontation with Iran on behalf of Israel will come to their collective senses.  It is truly remarkable that Jews worldwide are fearful of the rise of antisemitism and their personal safety, but they don’t seem at all concerned that such a war with Iran puts millions of Jews in Israel at real, not “existential”, risk of being attacked.  How is it possible that Jews are more worried about “white supremacists” and “antisemites” but not a full-scale war in the Middle East?