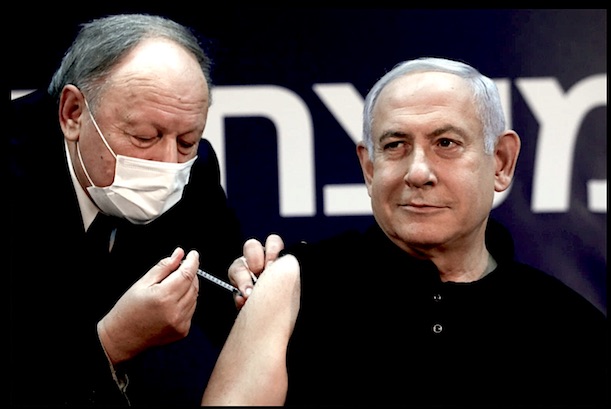 The man received the vaccine at 8:30 in the morning, and waited for the customary time at the health clinic before he was released to his home feeling well.

Some time later, the man lost consciousness and was later confirmed dead from heart failure.

The Health Ministry said, “A 75-year-old man from the north of the country suffering from active heart disease and malignant disease, who has undergone a number of heart attacks, was vaccinated this morning against the coronavirus and died at home shortly after the procedure.”

“We share in the family’s grief,” the ministry said, adding that “Initial examination does not show a link between the unfortunate incident and the vaccination.”

“The vaccination campaign continues,” it stated.

And if this man had died of a heart attack without the vaccine, they would have claimed he died of “COVID” — if he happened to “test positive” for the “virus” or not.

Yes, of course this vaccine caused this man’s heart attack — how much more obvious can it be?

Why would a vaccine cause a heart attack in someone like this 75 year old man with pre-existing heart disease?

Simple — all vaccines cause general inflammation — not just at the site of injection — as your body creates an allergic reaction to being injected with a foreign substance and tries to expel it.

Inflammation is one of the most common causes of cardiac arrest.

And what happens when you suddenly increase general inflammation in someone with severe heart disease? — They can very well go into cardiac arrest — this is NOT rocket science — it’s common sense.

And yet the authorities are insisting that the elderly — most of whom are immune-compromised — will be given these killer shots first — as if it’s some kind of privilege.

As we previously reported, a recent survey in Israel showed that up to 75% of Israelis said they were not going to get this COVID vaccine — but that still leaves over 2 million Israelis who will get it — and we are going to see many more “coincidental” deaths in the hours, days, months, and years after vaccination for a long time to come.

It would appear that Jewry is willing to sacrifice many of their own as part of a larger agenda to usher in their worldwide police state — as the Jewish philosopher-mass murderer, Vladimir Lenin, once euphemistically observed about communism — you have to break a few eggs to make an omelet.